McBride put his all into everything he did 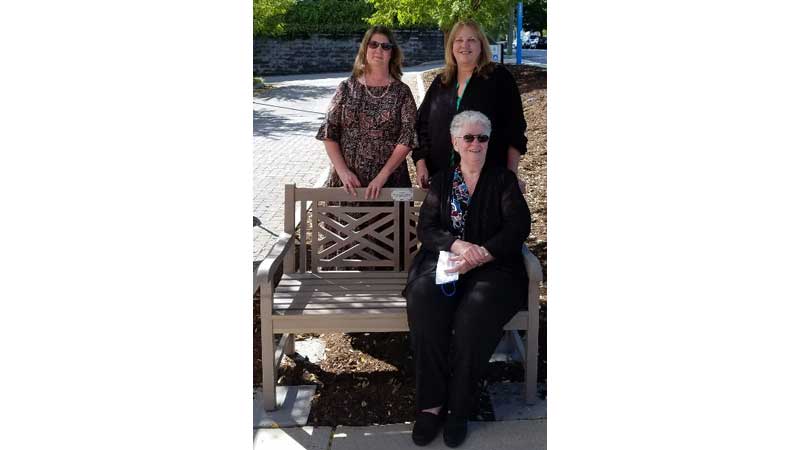 Betty McBride sits on the memorial bench dedicated in honor of her late husband, Thomas McBride, for his tireless efforts to serve the community through the Farmville Lions Club and Longwood Speech, Hearing, and Learning Services. Standing are Betty and Thomas’ daughters, Terry Jochum, left, and Valarie Forbes.

Thomas McBride, of Farmville, passed away on Memorial Day earlier this year, but he leaves behind an enduring legacy as a family man who was generous, a patriot, a Marine, a great storyteller, a Lion, a servant and an advocate, who never did anything halfway.

Evidence of that legacy was on display Friday, Oct. 2, when a memorial bench dedication ceremony was held at Longwood Speech, Hearing, and Learning Services (SHLS) to honor him.

Kyleigh Martin, representing SHLS, noted the ceremony was sponsored by the Farmville Lions Club, and the bench was placed at SHLS to recognize the many contributions McBride made to SHLS clients and the community.

Martin said 10 days after McBride’s passing, he was selected as the recipient of the Hamilton Relay 2020 Better Hearing and Speech Month Award for Virginia.

“Tom was an advocate for preventing hearing loss in young people and advancing the needs of persons with hearing loss,” Martin said. “He collaborated with SHLS to create the programs for students in the local school districts.”

A panel on the bench reads, “In Memory of Thomas Eugene McBride. Lion. Servant. Advocate.”

“He was just a good friend — very, very committed to helping people with hearing loss and helping to prevent hearing loss,” Power-deFur said.

McBride’s wife, Betty McBride, and their daughters, Terry Jochum and Valarie Forbes, were in attendance at the ceremony.

“I and my daughters were very proud of him the day that we had the dedication, because Tom, when he did something, he did it all the way,” Betty said.

Gathering with her daughters to reflect on highlights of who her husband was, Betty noted he was a true patriot who served 24 years in the Marine Corps.

“He loved his country,” Betty said. “He served two years in Vietnam.”

She said he ran a basic helicopter school in the Marines the last few years he was in the service.

“He traveled all over the world, and he was head of all the helicopter bases in the United States,” she said. “So, he would fly from east coast to west coast and have meetings with generals and colonels and admirals and everybody.”

After leaving the Marine Corps, he went to work for Sikorsky Aircraft in Stratford, Connecticut, for 19 years, and Betty recalled that he taught the mechanics of the helicopters all over the world.

Forbes and Jochum lived in the Tidewater area of Virginia, and Thomas and Betty ended up moving to Farmville.

In all of McBride’s 79 years, he was never idle, so though he was retired, he remained quite busy.

“He was constantly feeding his mind with the things that he was involved in,” Betty said.

She said he was a very dedicated person.

“Plus he was brought up that way by his parents, to be dedicated, and when you do something, you do it all the way,” she said. “You don’t just do it halfway, and that was Tom. That was him. He didn’t just fly by the cuff. He put his all into everything he did, including the Lions Club.”

He brought in a lot of people to be Lions, she said.

“He went to everything he could to get the knowledge of hearing and what hearing is to people, because he wore two hearing aids, so being in the helicopters all those years, he had problems with his ears,” Betty said.

“He knew how hard it was for people to hear, and he would interview people that he was going to give hearing aids to through the Lions Club and Speech, Hearing, and Learning Services. He would interview the people to get a little bit of knowledge on how they felt and what they go through, and it was amazing. It was just amazing.”

She said he got to know the people.

“I know a lot of people think, ‘Oh, that’s just a bunch of silly stuff, you don’t need to do that,’ but that was not Tom,” Betty said.

Power-deFur recalled that every time SHLS did a presentation on hearing, whether it was at Cumberland, Prince Edward or Fuqua schools, McBride was there.

“If we had any fundraiser, he was there, encouraging people to come,” she said.

McBride was also an avid writer and storyteller.

“He wrote several books, mainly just for family to read, on his life, his stories that he made up to tell his grandchildren about Santa Claus,” Betty said.

She estimated he wrote nine or 10 books.

“Tom had written a story about Snowflake — it’s a stuffed animal that Santa Claus gave Tom in his story,” Betty said, referencing a story Tom wrote for their first granddaughter. “And then when my daughter had another baby seven years later, he called that one Little Snowflake and wrote a story about that. And then after the (great-grand)baby was born last December, we came home after Christmas, and he went right on the computer to talk about Baby Snowflake. So his imagination was unending.”

Betty noted that family was very important to him.

“I could just go on all day long talking about what a good person he was, a generous person, giving himself to whoever needed help,” Betty said.