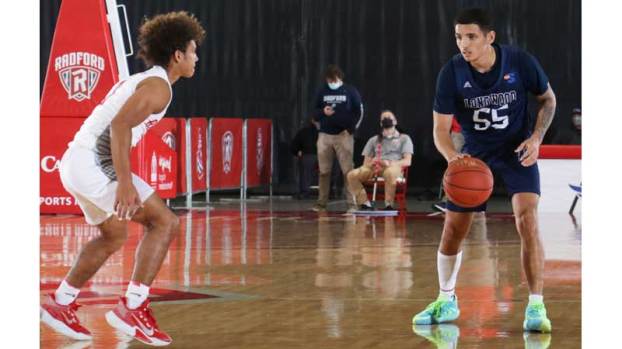 Longwood University redshirt junior point guard Juan Munoz looks for an opportunity on offense Monday, Dec. 14, against host Radford University. The Lancers lost 67-66 that night despite a career-high 29 points from Munoz. He added 10 points and four assists in a 62-53 loss to the Highlanders on Tuesday, Dec. 15. (Photo by Asha Evans / Radford University)

Longwood University’s men’s basketball team started its Big South Conference schedule 0-2 this week after falling to host Radford University on Monday, Dec. 14, and Tuesday, Dec. 15, in games the Lancers had chances to win.

Behind 14 points from freshman Fah’Mir Ali and a defensive stronghold in the final 90 seconds Tuesday, Radford clawed back from a double-digit deficit to overcome Longwood 62-53 in game two of the Big South series in the Dedmon Center.

Just 24 hours after pulling out a 67-66 nail-biter over the shorthanded Lancers (1-5, 0-2 Big South) in Monday’s Big South opener, the Highlanders (3-4, 2-0 Big South) once again took charge of the game’s final minutes Tuesday.

Squaring off against a Longwood lineup laden with youth in the absence of injured veteran guards Heru Bligen, Jermaine Drewey and DeShaun Wade, Radford erased a 10-point halftime deficit and ended the game on a 8-0 run and a perfect 8-of-8 stretch at the free throw line.

Radford’s comeback negated a dominant first half in which Longwood held the Highlanders to just 16 points until the halftime buzzer when Josiah Jeffers hit a three-pointer, drew a foul and hit the free throw for a four-point play. Despite that miscue, Longwood still took a 30-20 lead into the locker room, but the Highlanders carried that momentum into the second half and opened a 27-12 run that gave them a 47-44 lead with 6:39 to play.

From there, Radford matched Longwood bucket for bucket and never trailed the rest of the way.

“I’m extremely disappointed,” Longwood Head Coach Griff Aldrich said Tuesday. “This team is struggling to find itself right now, and we have a team that will play great basketball, will compete, will play extremely hard. We saw that at Wake (Forest). We saw that at North Carolina A&T. I thought we saw it last night, and we saw it in the first half of the game tonight. We were spectacular in the first half tonight. Then we came out and we saw a VMI and a Greensboro effort in the second half.”

The difference between Radford in the first and second halves Tuesday was a shooting percentage that climbed from 25% (5-of-20) to 48.1% (13-of-21) and a defense that converted 11 Longwood turnovers into 18 second-half points.

Longwood, once again using a youthful rotation composed of two freshman starters and seven first-year Lancers, got more than half of its scoring from its freshman class. Freshman guard Justin Hill, the reigning Big South Freshman of the Week, led the way with a team-high 14, while freshman guard Nate Lliteras scored a career-high nine, and freshman forward Jesper Granlund finished with five.

Punctuated by a double-digit comeback by Longwood and a furious final minute from Radford, the Highlanders got key defensive stops from Josiah Jeffers on the Lancers’ final two possessions and rode a pair of go-ahead free throws from Lewis Djonkam to grind out a 67-66 barn burner in the Dedmon Center.

In a finish that was the highlight of the Big South’s opening week of play, Djonkam sank a pair of go-ahead free throws with 16 seconds remaining, and Jeffers blocked freshman forward Bennett Mohn’s game-winning 3-point attempt at the buzzer to overcome 14 Longwood 3-pointers and a career-high 29 points from Munoz.

The one-point Radford win is the closest game between the commonwealth rivals since Radford’s 46-45 win on Feb. 8, 1984, and the third such one-point game since the series began during Longwood’s inaugural season of men’s basketball in 1976-77.

“I told them I was extremely proud of their fight,” Aldrich said of the Lancers. “The goal here is not to be the best we can be Dec. 14, but to continue to get better. We know we’re undermanned right now, but everybody fought, and they fought throughout to get back in that game.

“But it was a game we should have won.”

The Virginia High School League (VHSL) clarified Monday, Dec. 14, that it will not require masks to be worn in... read more