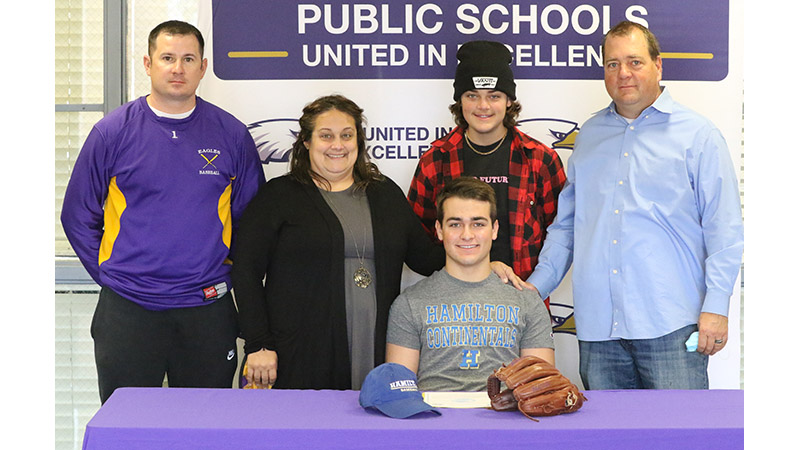 A lifelong dream for Mattison “Matt” Kinne came into focus when he recently signed to play collegiate baseball at Hamilton College in Clinton, New York.

Kinne had a signing ceremony in Richmond together with his family and his showcase team, RISE Baseball, Tuesday, Dec. 22.

Four days prior, the Prince Edward County High School senior was also recognized by his school with a signing ceremony, as his family, Eagles Head Coach Tyler Cristo and school administrators were on hand.

“It meant the world,” he said of the signing. “My whole life, I’ve wanted to play collegiate baseball. Growing up around college baseball since I can remember, it’s always been a goal of mine, and I feel like I’ve worked pretty hard at it for the last 12-plus years, so being able to have that moment was just — it was incredible.”

Matt Kinne has grown up around college baseball because he is the eldest son of Jeff Kinne, who is entering his 18th season as head coach of Hampden-Sydney College’s baseball team.

Matt Kinne noted he had offers to play at Hampden-Sydney, Massachusetts Institute of Technology, Bates College, in Maine, and Virginia Wesleyan University. He was also being recruited by various other schools up north.

The offer from Hampden-Sydney came during his sophomore year, and that fall, he went on a visit to the nearby college.

“I really had a great time on the visit, and I was considering it,” he said. “But then after time thinking about it, I just felt like it was better if I made a change, and I (thought) it would have been better athletically if I was able to play for someone new, have a new experience that way.”

His relationship with Hamilton began around the time school was shut down in spring 2020 due to the COVID-19 pandemic.

“I reached out to them along with a bunch of other schools, and I heard back from about 20 to 30 schools interested in my recruiting videos and all that,” he said. “And I played in a summer league in Petersburg where all of my games were on live television, so they got to watch me that way. And also, all of my footage I could record and send to them, so that was really helpful.”

He said most of the schools he was considering were in cities.

“I knew I wanted to be in a small town, like Farmville, and Hamilton just fit that perfectly,” he said. “The facilities are great, so they have an indoor baseball facility that’s perfect for the cold weather up there, and their field was brand new turf. They just got a brand new field a couple years ago.

“As well, I felt like the coaches were the most adamant about recruiting me,” he added. “They reached out all the time. I had phone calls with them all the time, and yeah, it was a great fit for me.”

He made a commitment to Hamilton in August and formalized it during the recent signing ceremonies.

“I am extremely proud of him,” Jeff Kinne said. “He worked very hard on the field and in the classroom the last few years to get this.”

Kinne’s mother, Jennifer Kinne, said she is beaming with pride for him.

“He makes parenting easy,” she said. “He is brilliant in the classroom and on the field. He is independent, determined and self-motivated. This move to New York is a big deal, and I can’t wait to see him shine at Hamilton.”

Matt Kinne, who plays shortstop for Prince Edward and mainly third and second base for RISE, said Hamilton coaches want him to play more in the outfield and at third base.

“They loved how I could play pretty much anywhere on the field,” Kinne said. “Later in the summer after my commitment in August and they let me know that they would want me to play a little bit more outfield when I got there, I started playing more outfield for the showcase team just to get a feel for the position and get used to it.”

Jeff Kinne hopes his son will be able to get some playing time sooner rather than later once at Hamilton.

“He is a hardworking player, so I hope his work ethic can help him get on the field some as a freshman,” Jeff said.

For helping him reach his current level of achievement, Matt Kinne gave thanks to his teammates, both at RISE and Prince Edward, his coaches, including his dad, RISE owner Chris Martin and Cristo, and all his close friends who pushed him to be the player he is today.

Academically at Hamilton, Matt has a clear direction he is focusing on.

“As of right now, I’m hopefully going to take part in the physics and engineering program,” he said. “So (at Hamilton), I would either major in physics or math, and after my four years at Hamilton, I would go to grad school at one of their partnership schools, which right now, I think I know of Columbia (University), Dartmouth (College), Cornell (University) and Washington University in St. Louis are the four that they told me I could go to.”