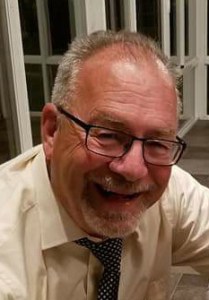 March 30, 1951 – December 14, 2020 Central Islip, New York native, Guy Brochard, received his angel wings on the evening of Dec. 14, 2020. Guy was one of four boys born to Elizabeth Dempsey and Francis Brochard. He grew up on Long Island, New York and after graduating high school went on to attend Farmingdale College, where he would later meet his wife, Theresa. The two were married on Dec. 2, 1972, and just celebrated their 48th wedding anniversary earlier this month. Guy and Terry eventually moved to Pamplin, where they planted roots to raise their four children on what still serves as the family farm—Whippoorwill Farms. For years, Guy worked in the medical field as a radiologic technologist until he and his wife fulfilled his life-long dream of opening a local pet store. “Noah’s Last Stop” has been owned and operated by the Brochards for over 23 years. The shop was Guy’s little corner of heaven on earth—a place where he could combine his passion for people and animals. Over the years, you could find him giving tours around the shop, educational presentations at schools, or hosting petting zoos at various community events. But his love for animals was not confined to the four walls of his store. Guy often loved searching for new furry friends of all shapes, sizes, and species to join his ever-growing family of animals at home as well. Guy’s life was full of love, as marked by the legacy of the ever-growing family he leaves behind. He is survived by his wife, Theresa; children, Tanya, Kerri, Chad, Jeanine, and son-in-law Steve; by his eight grandsons Vance, Nicholas, Austin, Joshua, Ryan, Tristan, Logan, and Daniel; by his three granddaughters Courtney, Lexi, and Emma; by his three great-granddaughters Natalie, Abigail, and Adalee; and by his three brothers Roger, Dean and Brian. As well as, beloved in-laws, nieces, nephews and close friends he considered family. In addition to his love for animals, anyone who knew him knew Guy was Disney World’s number one fan. Each year he loved taking his children, grandchildren, nieces, nephews, cousins, family friends, and anyone who would come on trips to Orlando, Florida to visit Disney World. Those summer vacations mark many of the family’s most treasured moments together and are a tradition they will no doubt continue in his memory. He had a larger-than-life personality and child-like sense of fun and humor all the days of his life. He had a tough yet gentle heart that never ceased finding ways to give to others. In times of need, he was always someone you could call. He knew no strangers and all he knew he considered family. His kindness, joy, and contagious smile will be remembered always, but above all else what his family and friends will cherish the most—he taught them how to love, unashamedly, without hesitation or limitation, with your whole heart. His light has left this world too soon, but he created a spark of love that will continue burning in his honor forever. A private, intimate service will be held with his immediate family next week. Puckett Funeral Home is serving the family. www.puckettfh.com.