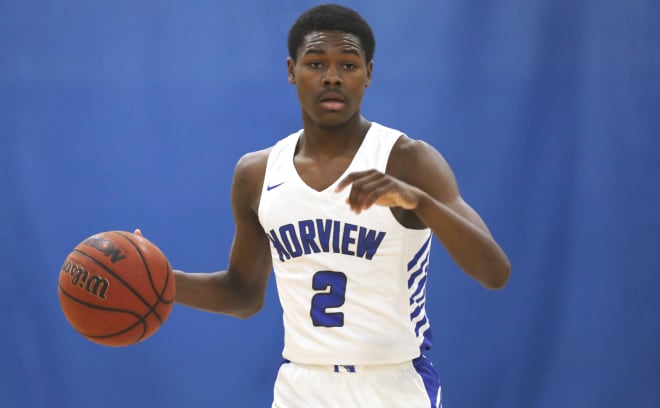 Jaylani Darden is a 6-foot-4-inch point guard from reigning VHSL 5A State Co-Champion Norview High School in Norfolk who has signed to play with Longwood University. As a junior, Darden averaged 19.6 points, 6 rebounds and 5.7 assists per game. (Photo courtesy of the Jaylani Darden family)

Tapping into a burgeoning Virginia recruiting pipeline once again, Longwood Head Coach Griff Aldrich announced the signing of Norfolk guard Jaylani Darden to a National Letter of Intent as part of the Lancers’ 2020-21 signing class.

A 6-foot-4-inch point guard out of reigning Virginia High School League (VHSL) 5A State Co-Champion Norview High School, Darden averaged 19.6 points, 6 rebounds and 5.7 assists per game as a junior. He has averaged double-digit scoring in each of his first three years of high school basketball, including 16 points as a sophomore and 14.5 points as a freshman.

“We are thrilled to have Jaylani and his family join our program,” Aldrich, also a native of the Tidewater area, said. “At 6’4”, Jaylani possesses a unique combination of size, passing ability, IQ and length that enables him to impact the game in many different ways.”

Darden’s junior-year production earned him 2019-20 Eastern District Player of the Year honors and helped propel the Norview Pilots to a share of the VHSL 5A state title. He was also named an all-state first team and All-Tidewater first team selection.

“We are excited to bring his versatility to Longwood and look forward to his positive impact on our team,” Aldrich said. “A product of the Boo Williams EYBL program, Jaylani is another Tidewater area player that has played against national competition and excelled, and we look forward to his further development with the Lancers.”

Darden is Aldrich’s second signee from the coastal region of Virginia, joining Virginia Beach native DeShaun Wade, who was part of the 2019-20 class. Slated to join the Lancer program as a freshman next season, Darden will be the sixth Virginia native on the Lancers’ 2021-22 roster.

An honor roll student, Darden plans to major in kinesiology, play professionally, and pursue a career in sports medicine or physical education after the conclusion of his basketball career.