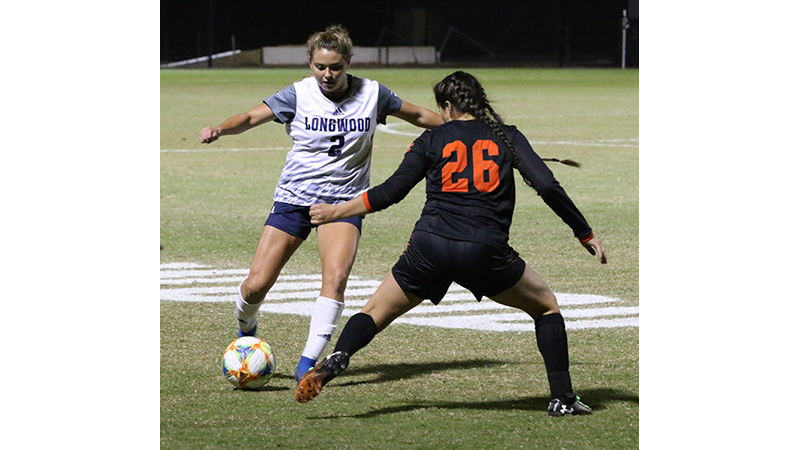 Longwood University’s Kiersten Yuhas, now a sophomore, competes during her freshman season in 2019. She was part of an underclassmen trio Friday, Oct. 23, that showed promise in an intrasquad scrimmage as the Lancers prepare for their official season in the spring. (Photo by Titus Mohler)

They may be months away from their season opener this spring, but the Longwood University women’s soccer team is already sharpening its competitive edge.

In a Blue-White intrasquad scrimmage Friday night, Oct. 23, at the Longwood Athletics Complex, youth stole the show, and three goals from the underclassmen trio of Kiersten Yuhas, Kyleigh Cox and Katelyn Laux powered the White Team to a 3-2 win over their Blue counterparts.

Yuhas and Cox, both sophomores, and Laux, a freshman, were part of an underclassman surge that accounted for four of the game’s five goals.

The White Team trio scored in succession to build a 3-0 lead before the Blue Team rallied back with a pair of goals from freshman Camille Jernigan and senior Madison Lockamy to close the gap late.

However, that would be as close as Blue came to overcoming the deficit, as White’s midfield and backline snuffed the threat.

Junior Danielle Toone, a starting forward in 2019 and a former Big South All-Freshman Team selection, also played a key role in that late-game lockdown in her debut playing as a holding midfielder. Sophomore goalkeeper Mary Kate Levush turned in a shutout performance with two key saves.

“There was tons of energy, action and drama tonight,” Longwood Head Coach Todd Dyer said as he prepares for his 27th season as head coach and founder of the program. “Overall this was a very exciting night for our program.”

With the Big South’s traditional fall soccer pushed to the spring due to COVID-19 concerns, the Lancers will continue their preseason preparation for the duration of the semester leading up to a February 2021 season opener.