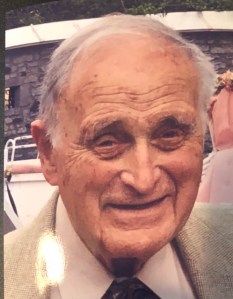 Thomas Edward DeWolfe II passed away on Nov. 13. He was a well-loved husband, father, friend, soldier, and absent-minded Psychology professor. He was best known for his great sense of self-deprecating humor. His interests included economics, politics and reading books of every genre. Tom traveled extensively in the army and with family throughout the United States, Canada, Europe, Japan, Mexico, the Middle East, North Africa and Thailand. He published more than thirty works in journals and in books about moral reasoning, criminal psychology and the law, the history of psychology and the impact of psychologists on modern life. Dr. DeWolfe taught psychology at Hampden-Sydney College from 1966 until his retirement in 2003. He held numerous leadership roles as president of the Academy of Academic Psychologists, Secretary of the Virginia Psychological Association, deacon and elder in College Presbyterian Church, scoutmaster and a member of the Prince Edward County Human Relations Council during the civil rights era. Tom most of all enjoyed meeting international lecturers in his roles as Chair of the HSC Lectures and Programs Committee and Woodrow Wilson Fellowship. He also served as a clinical psychologist and as an advocate for patient’s rights at Piedmont State Hospital and as a consultant for the Virginia Departments of Vocational Rehabilitation and Disability Determination Services and regional school districts. After retirement, he loved reading the Richmond Times-Dispatch and writing letters to the editor. Born on Feb. 21, 1931 in Portland, Maine, Tom grew up in Westbrook, Maine, graduating in 1949 as valedictorian of Westbrook High School. After graduation from Harvard in 1953 with a BA in government, he served as a medic in the US Army from 1953 – 55, far eastern command in Japan. He then studied at Vanderbilt University receiving the MA in Experimental Psychology. With an internship in clinical psychology at the University of Texas Medical Branch, he received the PhD in clinical psychology from the University of Houston. He was pre-deceased by his parents James Codman DeWolfe and Doris Smith Greenlaw DeWolfe, by his sister Ellen and brother-in-law Harry Steere and by his sister Elizabeth D. Faye. He is survived by his wife, Carolyn Turner DeWolfe, his children; Benjamin Thomas DeWolfe (Dana Lipsitz DeWolfe) of Huntersville, North Carolina, James Lloyd DeWolfe (Angelina DeLong DeWolfe) of Centennial Colorado and Heather Steere of Cumberland. His grandchildren are Brayden and Ashlyn DeWolfe of Huntersville, North Carolina, Tommy and Alexandra (Sasha) DeWolfe of Centennial, Colorado and Tony Lee Baldwin of Cumberland. A private funeral service will be held on Sat., Nov. 21. Contributions in his memory can also be given to College Presbyterian Church. During the last months of his life while struggling with the uncertainties of his health, he reminisced with his family about his life and concluded, “I’ve had a good life.” Those of us who knew him and loved him would agree. Puckett Funeral Home is serving the family. www.puckettfh.com.