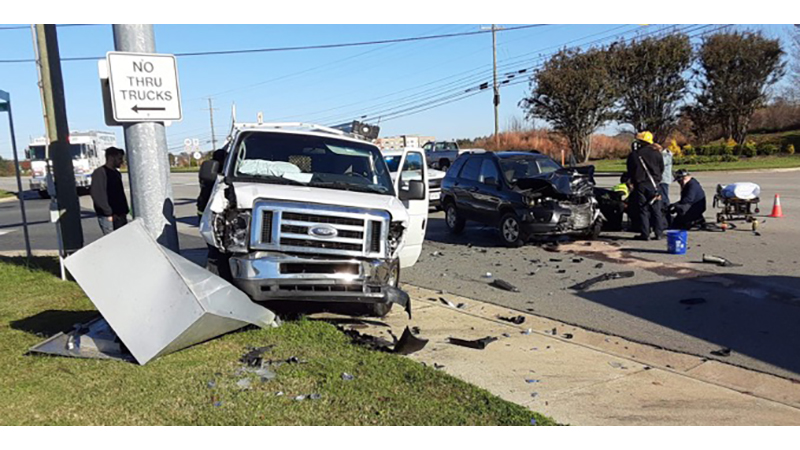 The Ford van, left, struck and damaged the traffic light control box at the intersection of East Third Street and Milnwood Road on Wednesday, Nov. 4, in Farmville. The damage came after an initial crash with the 2009 Kia SUV, pictured on right.

A two-vehicle accident Wednesday morning, Nov. 4, in downtown Farmville led to an injury to one of the drivers and to a disabled traffic light.

Details could not be released yet on what caused the crash.

“We’ve got a pretty good idea, but it’s still under investigation,” Hogan said.

He noted that as a result of the initial accident, the Ford struck and damaged the traffic light control box.

“The traffic light at that intersection is not currently working, and it will not be working for several days, probably,” he said early Wednesday afternoon.

The town has put up some temporary measures.

“If a traffic light is not working, (motorists) should treat the intersection as a four-way stop,” he said Wednesday. “But our plan is hopefully by the end of the day, we can at least get (the lights) back on flash, and we’re going to hope to have Third Street as a caution light, and we’ll have Milnwood and Persimmon Tree Fork Road as stoplights, stop signs. Stop signs have already been erected on Milnwood and Persimmon Tree Fork Road.”

Hogan stated the driver of the Kia was a 38-year-old Blackstone woman, who was the sole occupant of that vehicle.

“She was flown to (Medical College of Virginia) for leg trauma, but her injuries are not considered life-threatening at this time,” he said.

He noted the Ford van did have a passenger along with its driver, but neither of them had any injuries that required medical attention.