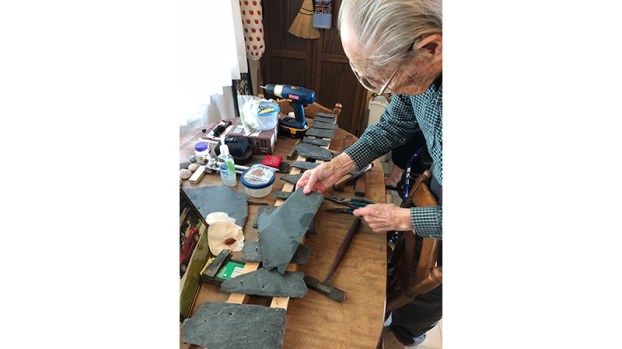 Dick Dietrich found that only slate from Arvonia would produce the clear tone needed for his special instrument. Slate pieces from other states did not have the correct composition for music making. 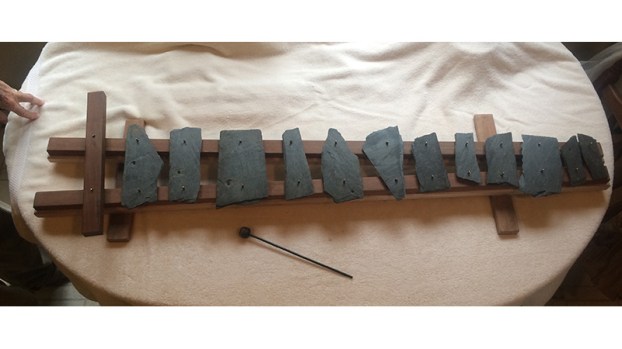 A special trip was made by family friends Karen DeBord and Jack Phillips to return to Buckingham Slate to find two pieces that would replace the missing keys of Dick’s hand-crafted petrophone. 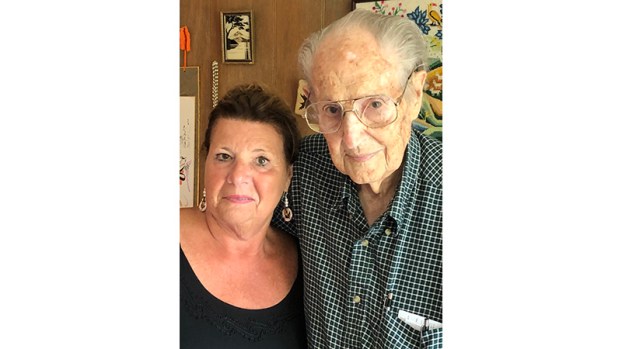 Krista Brown said her father had quite the ear for pitch and was very particular about getting the scale for his petrophone exactly right.

A late geology professor and music enthusiast spent the last several years of his life creating an instrument made from a special type of slate formed right in Buckingham County.

According to friends and family, Richard “Dick” Dietrich, then a young geology professor at Virginia Tech, took a trip in the 1950s to visit the Buckingham Slate quarry in Arvonia.

Dick, known to have an exceptionally sharp ear for music, developed a special interest in the way the hand-split slate produced chime-like tones upon falling to the floor. A worker at the quarry gifted him a slate shingle with an exceptionally good tone, which later was sometimes used as the family dinner bell by himself, his wife Frances and their three children, Krista, Kurt and Rick.

A gifted musician, Dick could play a variety of instruments, sang, and directed church choirs in Blacksburg while in his thirties and later in his nineties when living just outside of St. Ignace, Michigan.

Approximately five years before his death, Dick revisited his interest in the tones produced by slate. Blending his passion for geology and music, he began to craft a xylophone-like instrument composed of slate collected from discard piles during subsequent visits that he made to Arvonia. He dubbed this instrument a “petrophone.”

According to his daughter, Krista, the instrument became an on-and-off project for Dick over several years. The large petrophone spent the majority of its time on top of her father’s kitchen table, where he worked to chip away at the slate pieces slowly in order to produce a perfect pitch.

“It was so amazing, his determination to get that to sound just perfect,” she said.

In making the petrophone, two of the original slate “bars” were broken during transportation. Having grown too old for extensive travel, Dick set out to find other pieces that could replace the broken keys.

But slate from other states did not give out the fine tone quality produced from the unique layering of Arvonia slate.

In 2018, longtime family friend Karen DeBord and her husband, Jack Phillips, who own Bedford Landings Bed and Breakfast in Smith Mountain Lake, ventured to Buckingham Slate to rummage through the company’s scrap pile in search of new bars for the petrophone.

The couple brought with them two pieces of wood similar to the frame of the instrument in order to set the slate pieces down and strike them with a mallet to attempt to produce some sort of tone.

DeBord said while some pieces just went “thud,” others produced deep, quality sounds. When modified, the pieces were able to replace the missing bars. Buckingham Slate did not charge DeBord and Phillips for the scrap pieces.

Although Dick’s extra-sharp ear meant the instrument still had to be tinkered with and an additional wooden key eventually had to be added, the petrophone was finally completed in early 2020. He died shortly after on June 8 at the age of 96.

As a petrologist, Dick was able to identify certain qualities of Arvonia slate that made for excellent musical keys, including texture expressed by the luster and shapes of the surface of the slate. He also found the size of the slate to be important, and that pieces with longer dimensions produced lower tones.

The instrument provides a major octave plus the next four higher notes. The lowest note is the G above middle C. The wooden lowest key is “doe” on the scale, and the 11 pieces of slate that follow extend upward as re, mi, fa, so, la, ti, doe, re, mi, fa, so.

The keys are mounted on top of a frame that consists of two pieces of hardwood and are held in place by brass pegs set in holes drilled into the frame, extending upward through piano key felts beneath the keys. The diameter of the holes in the keys is slightly larger than that of the brass pegs so that the bars are free to vibrate.

After his death, Dick’s petrophone fell into the possession of his son, Rick, who now has plans to give the instrument to DeBord, who helped to make its completion a reality.

“I’m very touched,” DeBord said. “He’s a man that I would probably want to emulate as I age, because he aged so gracefully and was so smart and creative throughout his lifetime. He’s a wonderful example for I’m sure many of his students, but also for others who came to know him.”

“I think that it’s really sort of inspiring that well into his nineties he was still looking for new projects,” Dick’s son, Kurt, said, “and this particular one combined his love of music along with his longtime professional interests in geology, and the two of them just came together and he was able to do this even at that age.”