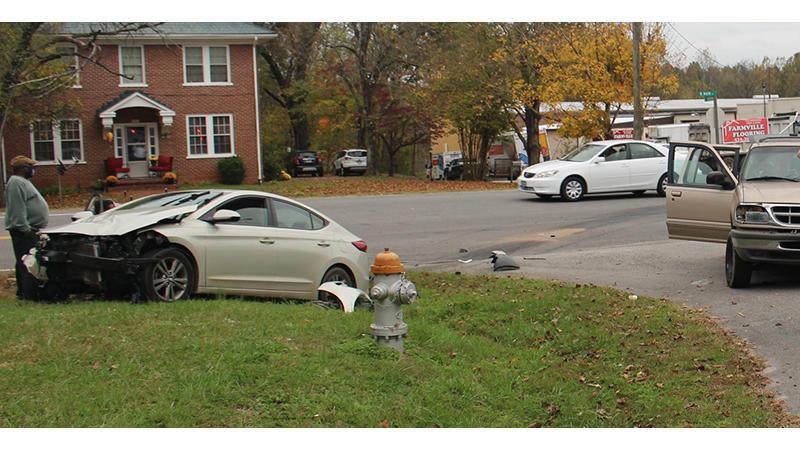 The scene of the crash at Osborn Road and North Main Street. (Photo by Dan Pempel)

A stop for a traffic violation led to a pursuit by the police department Wednesday afternoon, Oct. 28, in downtown Farmville.

“We had an officer attempt to stop a vehicle for a traffic violation,” Farmville Police Department (FPD) Chief Andy Ellington said. “The vehicle took off and crashed at the intersection of Osborn Road and (Route) 45 (North Main Street), crashed into another vehicle.”

The fleeing vehicle had four occupants, Ellington said. Three jumped out and fled on foot, and one was arrested at the scene.

After a search between Northview Drive and Needham Street, police were able to find some of the fleeing suspects.

He reported at 8:35 p.m. that the fourth suspect was taken into custody after being found walking down Plank Road near Raines Tavern in Cumberland County.

“The vehicle that was involved in the crash they were driving has been confirmed to be stolen out of Henrico County,” he said.

In the early evening, Ellington reported there were no major injuries that he was aware of.

“One of the suspects was taken to (Centra) Southside (Community Hospital) just to be checked out,” he said.