Chad Eisele describes his first day in Farmville as a whirlwind. 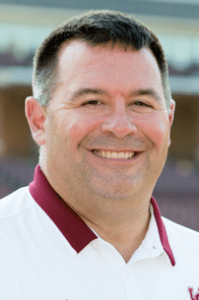 It was back in 2017. He was a finalist for the position of director of athletics at Hampden- Sydney College (H-SC) and flew out from Illinois for an interview and a tour of the town, getting a quick glimpse of the area and enjoying a meal at Cook Out before getting on a flight back home the next day.

A week or two later, the call came from Hampden-Sydney College President Dr. Larry Stimpert offering Chad the job. He and his wife, Kathleen, flew out to Raleigh-Durham International Airport, rented a car and drove to Hampden Sydney, where Chad gave his wife a brief “tour” of the town that consisted of a drive all the way to Walmart and back.

Admittedly, there was some hesitation. Back in Illinois, the Eiseles lived only 45 minutes away from close family, and suddenly they were considering a move across the country.

Hampden-Sydney College brought so many things Chad was looking for, but sensing the weight of the decision and the concern about relocating, he told himself he would have to get through the following day and consider declining the position.

The next day, Chad and his wife were given a tour around Farmville by now-retired H-SC Lacrosse Coach Ray Rostan. Rostan showed the couple every inch of the town, took them down every street, and before Chad knew it, his wife was excitedly taking advantage of every photo op the town had to offer.

After a long day of sightseeing, the Eiseles said goodbye to Farmville and H-SC and made the drive back to Raleigh-Durham, sitting mostly in silence as they reflected on their trip. They arrived at the airport several hours early, started talking and called and accepted the job offer before getting on the plane to fly back home.

Now, Chad is going on his fourth year as director of athletics and third year as the college’s head golf coach. He and his family reside on campus.

Chad was drawn to Farmville by several things — from the very beginning, he felt welcomed by the Hampden-Sydney community. Farmville is only a short distance from so many cities and famous historical sites.

That famous southern hospitality is also a plus.

“The people around here are so welcoming and so open. They open their doors and really want to get to know you,” he said.

Chad also has big hopes for the community’s future, particularly in attracting young people to come to town and build their lives. His hope is that as the decades pass, Farmville is kept vibrant and a place young people will continue to want to build a family and call home.

CHAD EISELE is the director of athletics/head golf coach for Hampden-Sydney College. His email address is ceisele@hsc.edu.