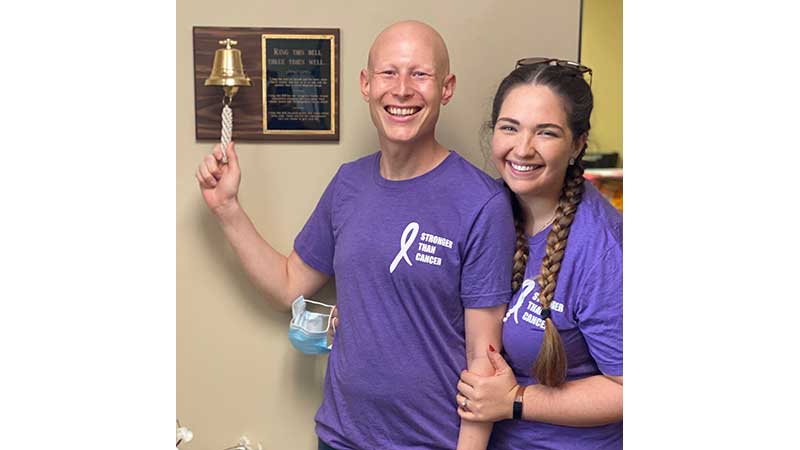 Nicholas Storment, left, rings the bell three times, signifying the end of his chemotherapy treatment at Centra Southside Community Hospital this year. He is celebrating in this photo with his wife, Kristin Storment, who has been his biggest supporter as he has successfully battled Hodgkin’s lymphoma.

Nicholas Storment and his wife, Kristin, were visiting with family in the Farmville area toward the beginning of this year when he went to see a doctor to address a cough that would not go away.

“We were living in Oregon, and we were actually planning on moving overseas, so we were coming home to visit with family, and then I found out I had cancer,” he said. “So we are kind of here now.”

The cancer was identified as Hodgkin’s lymphoma.

Born and raised in Gresham, Oregon, just outside of Portland, the 32-year-old Storment was a long way from home as he battled cancer this year amid the COVID-19 pandemic. But together with support in the area and from the other side of the country, he has experienced victory, with the last scan showing no cancer in his body.

In describing what the journey of 2020 has been like for him, though, he did not sugar-coat it.

“It’s been really difficult,” he said.

He shared how the main part of that journey began. It was in February.

“I kind of had a cough that wouldn’t go away, and I wanted to get it checked out before we left, and so I went to Crewe Medical Center and had some blood drawn,” he said. “I went back for another visit, got an X-ray and they couldn’t see anything, so then they sent me to the emergency room here in Farmville. And that’s when I got the CT scan, and I found that I had cancer in the emergency room.”

He said the emergency room doctor was very kind in how he worked with him and his wife.

“He was really nice, had my wife sit down, and with tears in his eyes, he was like, ‘I’m really sorry to have to tell you this, but you have cancer,’” Storment said.

Storment recalled his own reaction to the news.

“I guess in the emergency room, I was just shocked,” he said. “My father-in-law had just passed away from pancreatic cancer a month prior, and so I was a little scared. Even though they’re two completely different cancers, you hear you have cancer, and it’s just kind of scary.”

About a month and a half transpired between this cancer diagnosis and the news that it was Hodgkin’s lymphoma. This news came out of an appointment and procedure done in Lynchburg, and it was accompanied by optimism from doctors.

“If you’re going to get a cancer, Hodgkin’s lymphoma is one of the curable cancers, and so they said that that was good news,” Storment said. “Even though it’s been hard, they said that will be a preferable cancer, for sure.”

He noted that he had a mediastinal mass that was affecting his heart and lungs. He was having really bad acid reflux because the cancer was also affecting his esophagus.

“I ended up having a ton of pain pretty soon right away once they caught the cancer, which is a little weird because I wasn’t really having much pain up until that point,” he said.

Before he started chemotherapy, he was rushed to the emergency room because he was having sharp pain in his chest.

“Every time I’d breathe in, I don’t know, it was excruciating, really painful pain,” he said. “And I found out later, right before I started chemotherapy, that the cancer had cracked my sternum. So that was kind of crazy.”

He said that because of incidents like that, his oncologist put him on an aggressive chemotherapy treatment.

“He treated me like I was a Stage 4 patient,” Storment said. “And so he put me on a new drug for chemotherapy. There’s a sequence called ABVD, which is usually what people do.”

The “B” in that sequence stands for Bleomycin.

“They switched that out for another drug called Brentuximab, and it’s a kind of new-ish form of treating cancer, and it’s really effective, and it works really well,” Storment said.

He ended up having 12 chemo treatments, one every other week starting in April and running into September.

At this point in October, he said doctors are not quite sure if the cancer is in full remission, but the tests are quite encouraging.

“My last scan, everything was clear, and I’m trying to get a second opinion right now about whether or not I should do radiation, but as of this point, yeah, there’s no cancer in my body,” he said.

He noted that his primary doctor was ecstatic with how the chemotherapy went.

Storment has been receiving the treatments at Centra Southside in Farmville, and he was highly complimentary of his care team there.

“I have to say that the nurses were amazing,” he said. “They were so kind and compassionate, and they were great at explaining stuff and were always happy to be there.”

He also heaped praise upon his wife for her help.

“She’s been so awesome throughout all of this,” he said. “She’s been my biggest support.”

In addition to her family here, he has also benefited from being part of an area church family — King Street Church in Keysville.

This year has still featured plenty of isolation, though.

“I’m an extrovert, so having to stay home a bunch has been really difficult,” he said. “I just have to be really careful when I go out, and I try to limit how much I go out and do stuff.”

He and his wife are still planning to live overseas, but the pandemic and his now being immune-compromised have simply pushed back the timetable a bit.

“With Hodgkin’s lymphoma there’s, I guess, a pneumonia you can get even after the cancer’s gone for up to six months to a year, so we’re kind of waiting until my immune system builds back up before we make any plans to move,” he said.

In the meantime, he has support near and far to help him carry on.

“It’s just been really hard, but luckily with my church community and my friends and family back home, it’s been a lot easier,” he said. “A lot of them are sending me care packages, and lots of cards with prayers and words of encouragement along the way have really helped keep my spirits up.”