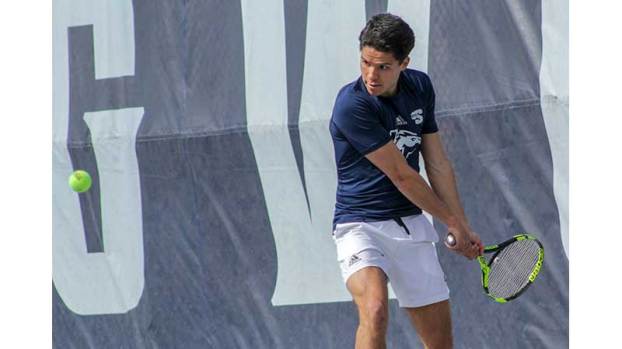 Longwood University senior Guilherme Sergio won both of his singles matches and his doubles match last week in the Longwood Blue-White Scrimmage, an intrasquad event. The Lancers tennis program is preparing for the upcoming spring season, which is set to begin in February. (Photo courtesy of Longwood University) 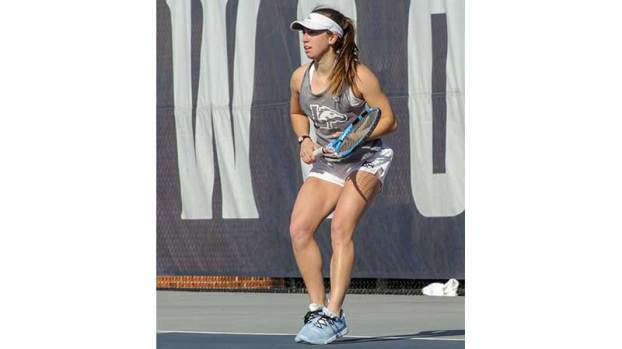 After two days and 12 matches on their new home courts, Longwood University tennis’ Blue squad held off White for a 7-5 win in the Longwood Blue-White Scrimmage.

The two-day intrasquad event took place on Friday, Oct. 23, and Saturday, Oct. 24, in the tennis program’s new home facility next to Buddy Bolding Stadium on the southern end of Longwood’s campus. The event featured two rounds of singles competition and two doubles bouts.

After Blue took an early 3-2 lead following Friday’s five singles bouts, the teams returned to the court Saturday and split two doubles bouts before Blue locked up the Blue-White victory with another 3-2 triumph in singles play.

The Blue Team benefited from a pair of dominant showings from men’s senior Guilherme Sergio, who won both of his singles bouts and paired with sophomore teammate Ernest Rocabert for a doubles win, and women’s sophomore Maria Saez, who went 2-0 in singles play. Saez and Sergio were the lone Lancers to win both of their singles bouts, while Sergio finished the weekend undefeated in both singles and doubles.

“I’m excited we won,” Saez said. “I saw my team growing up, which is so good. We have to work on more things, especially in doubles, but I’m so happy about today.”

Also picking up singles wins on day two of the scrimmage were women’s senior Crystal Nzewi, men’s sophomore Ernest Rocabert and men’s junior Guillermo Cagigas. Both Nzewi and Rocabert earned doubles wins as well, with Nzewi pairing with freshman Alexandra Hincu for a three-set victory for White, and Rocabert teaming with Sergio to counter with a two-set win for Blue.

“It was great to win for the team, especially since I didn’t win yesterday,” Cagigas said, whose 6-1, 6-1 win over Blue freshman Sebastian Mezo avenged his two-set loss to Sergio on Friday. “Even though we were losing 7-4, there are still more matches to play.”

The Blue-White scrimmage is one of many intrasquad competitions for Longwood tennis this season in the midst of a preseason that does not include any official tournaments. The Lancers will continue to prepare for their upcoming spring 2021 season, which will begin in February.