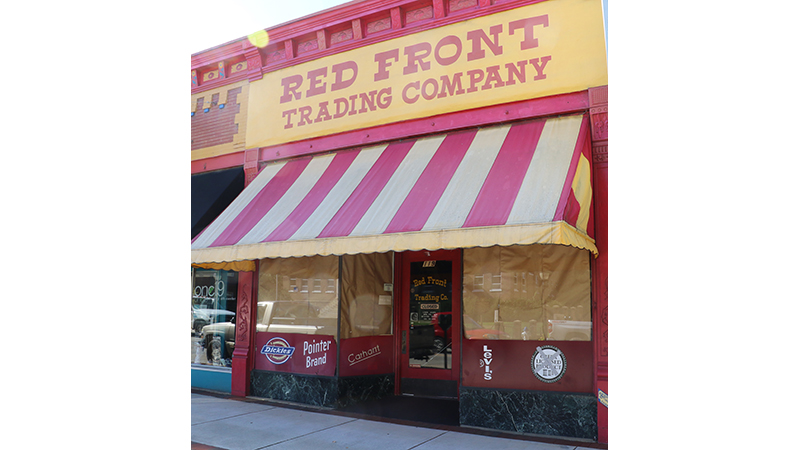 The Red Front Trading Company reopened Monday, Oct. 5, at 10 a.m. for the first time since the beginning of the COVID-19 pandemic. This signalled the beginning of liquidation, as Owner Bobby Carter plans to close the store, which has existed in Farmville for 41 years. (Photo by Titus Mohler)

The Red Front Trading Company began the ending of its operations Monday morning, Oct. 5. At that time, the work clothes store reopened for the first time since the beginning of the COVID-19 pandemic and started liquidating its assets, with deals on Carhartt and Dickies clothing lines, Red Wing Shoes, Red Kap Work Clothing and other items.

Bobby Carter, owner of Red Front Trading Company, said he is not sure when the store will be officially closed because it depends on how quickly the liquidation happens.

“I would imagine it’ll take me the rest of the year to close it,” he said. Asked what factors led to his deciding to close the business, Carter first pointed to the novel coronavirus and the fact that he is 84 years old. But then he went on to highlight other factors related to how much has changed in the retail business.

“In the old days, people that you bought from were very loyal to you,” he said. “So when I first started Carhartt, I was the only dealer between Richmond, Lynchburg, Charlottesville and Danville. There was no other dealer in Carhartt. Now if you get $5,000 and a Porta-John, you can get the Carhartt line and sell it. So it doesn’t mean that much today.

“Plus you can go on the internet and get it all the time too, and as my customers tell me, ‘I can always get it cheaper,’” he added. “So there are a lot of reasons for me to close.”

Physical health is not one of them, though.

“I’m the healthiest 84-year-old man you’ve ever seen,” he said. Carter began his history as a merchant in Farmville in 1969 with his store called The Fashion Post that sold high-end clothing. He would later sell this store.

He opened the Red Front Trading Company in August 1979, getting into the work clothes business.

“I opened in a building that is on the corner of North and Third street(s) that was known as Red Front Grocery Store,” he said. “I rented that building.”

He ended up needing to own a lease to continue carrying certain clothes.

“So I bought a building up on Main Street from a guy by the name of Scott Harwood,” Carter said.

It was in 1981 that he moved the Red Front Trading Company to the building it is located in now, at 119 North Main Street.

“(Working) 51 years in Farmville has been a wonderful experience,” Carter said. “I hope I haven’t made any enemies, but I’ve made a lot of friends, and I was needed at one time. But I don’t think a little, small man is ever needed anymore. Once you’ve got the internet, you can get it at home. You don’t have to come downtown to get anything today. Amazon will get it to you in two days with no freight.”

Carter said he does not know if the store closing means retirement for him.

“The Red Front will still be there,” he said. “It just won’t be operating as a retail outlet.”

He noted he does not know if he will maintain ownership of the space and be doing things there or not.