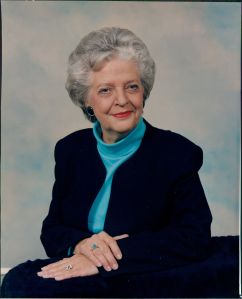 Margaret Aileen Bailey Epperson died on October 2, 2020 in Lynchburg. She was a devoted wife, mother, grandmother, great grandmother and friend. Born on August 10, 1933 in Halifax, Aileen was raised on the family farm in Charlotte County. She attended Randolph-Henry High School and was active in many high school clubs and organizations. While Aileen won the Miss Brookneal and Miss Charlotte County Pageants in 1951 and was honored to represent Charlotte in the Tobacco Bowl Festival in Richmond, her inward beauty was unmatched. Upon graduation from high school, she moved to Washington D.C. to work for the FBI. She later worked for the Bon Air School for Girls Correctional Facility in Richmond. In 1970, her family moved to Farmville. Aileen worked for Longwood College for 28 years as a VP Administrative Assistant. She loved playing the piano and was involved with many church choirs. She was a member of the Farmville Presbyterian Church. Aileen’s laughter was contagious. She loved her family, cherished her many friends and rarely complained. She treasured family beach trips. Her later years were spent at Bentley Commons Senior Living Community in Lynchburg and the family wishes to thank the management and staff for their thoughtful care. Special thanks are extended to Gentle Shepherd Hospice, also from Lynchburg, for their comforting support during Aileen’s final days. Aileen was preceded in death by her parents, Ashby Conway Bailey and Mary Holt Bailey, her brother, Calvin Bailey, her sister, Anne Bailey Jarvis, and her husband, Benjamin P. Epperson. She is survived by son Richard P. Epperson II (Debbie) from Farmville and daughter Treena E. Koroneos (Erik), two grandchildren – Andy and Blake Koroneos and one great-granddaughter Harper McClure all from Lynchburg, one niece and several nephews. Interment will be private. A Celebration of Mrs. Epperson’s Life will be held at 236 Farmville Lake Road in Farmville on Saturday, October 17 from 3 p.m. until 5 p.m. Casual dress. In lieu of flowers, contributions may be made to Longwood University or a charity of your choice.