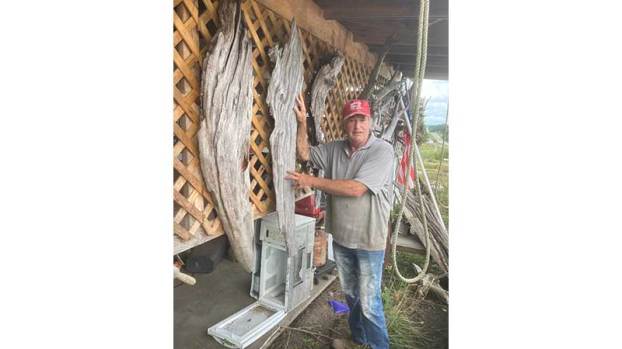 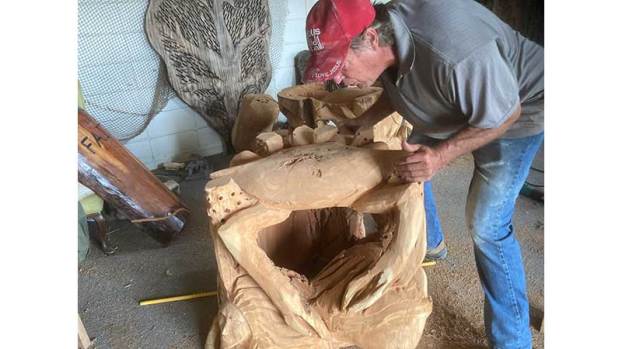 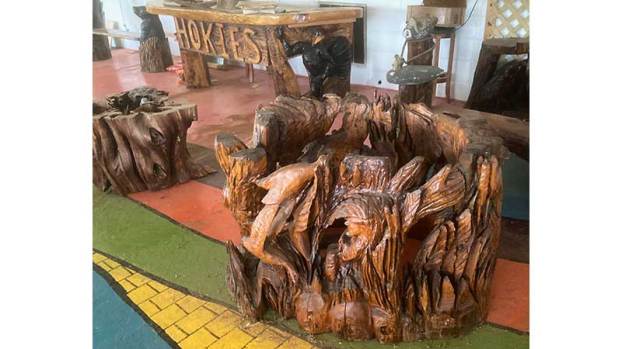 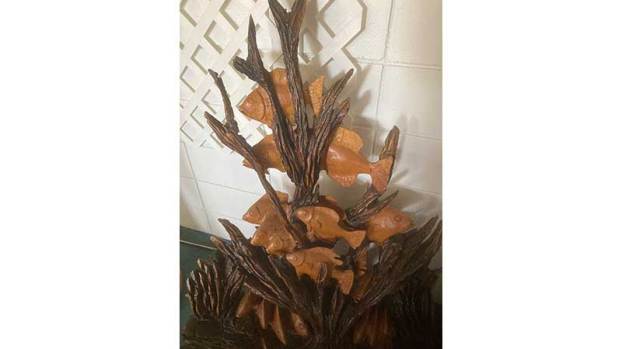 The story of how South Hill resident Tommy Winn went from a mobile home salesperson to chainsaw artist begins with a confession and a testimony.

“When I got saved, I was a devout alcoholic and drug addict. I never thought I’d quit smoking dope the rest of my life. I was raising marijuana in my house,” Winn said. “I probably had $10,000 of marijuana in the basement. I argued with God about it and finally went down there and burned it all up in the fireplace.”

Winn was a featured artist at the Five County Fair last year. It was his first year at the fair.

“I went for the children. I didn’t go for the money,” Winn said at his South Hill location near the intersection of U.S. 58 and Highway 1. “I carved over 200 pieces of artwork and gave them away for the children and the veterans.”

But Winn doesn’t give away all of his art. He said although he gave away a lot of art, he sold some at the fair as well. A carved bear went for $600, and he got a job for $3,000 by being at the fair that also led to another job. Winn says events like the Five County Fair pay off in the long run.

“In 10 years I might make $20,000 off of that show. So, it’s not all about today,” Winn said. “I’m not looking to get, I’m looking to give, because paying it forward is something that people don’t understand.”

After quitting his job as a mobile home salesperson in 1996, Winn began selling driftwood. He would gather the wood out of nearby Kerr Lake and sell it to landscapers and florists in the area.

“I was making pretty good money,” Winn said. “So then I started buying resin figurines.”

Winn would make an eagle’s nest out of driftwood and place a resin figure of an eagle in the nest. One of those still stands tall outside Winn’s shop.

“I have saved driftwood since I was 6 years old. I started collecting it. It is something that I’ve always thought was absolutely God’s art,” Winn said, showing a piece of driftwood in his collection outside the shop. “You don’t have to do anything. This is a root ball to a tree. Is it not magnificent?”

Winn takes some of the driftwood and carves turtles, fish, mermaids, deer, eagles, lions, pigs and assorted other creatures, making art that he sells on his Etsy site 3DDriftwoodwonders. He makes headboards for beds, desks, tables and art to be hung on walls, displayed in foyers or even yards. Winn was in Charlotte County last February carving a tree in a resident’s yard.

He showed how he blocked out carvings depending on what he sees in the piece of wood. A long skinny piece of driftwood becomes the profile of the face of an Indian chief. Another one becomes a bird.

“Sometimes I will have 15 to 20 pieces going at the same time,” Winn said. “When you’re creative and you walk by a piece of wood and you see what’s in that wood, you need to block it out. I’m a chipper. I just chip away at it with little chips. A lot of people just go for it and they’re going for the money. They go and they carve a bear. I can carve a bear in 10 minutes.”

“After you start cutting on it, sometimes things change and morph on you and it’s not what you started, but it’s what you finish with,” he said.

The larger pieces Winn works on take between 400 to 800 hours of work. He has been working on a special three dimensional piece in his shop he began almost a decade ago, a carved piece of wood with three dimensional fish and coral. The price is $12,000, firm.

“It took me three years to complete this piece.”

Unlike many chainsaw artists who carve images into tree trunks, Winn creates space and open areas in the wood, making the sculptures stand out.

Winn went from placing figures on driftwood to actually carving the wood with chainsaws and making sculptures in 2007. He said God told him to start carving wood.

Winn’s creativity has slowed down the past several years. He took some time off to care for his wife who died in 2019 of congestive heart failure. He is back at work, but making money by churning out piece after piece is not his objective.

“If I’m going to do it, and I’m going to sign my name on it, I want it to be something somebody treasures,” Winn said. “I’m not saying I’m quitting, but I’m not going to run myself crazy trying to make a living. I’m at peace with what Jesus gives me.