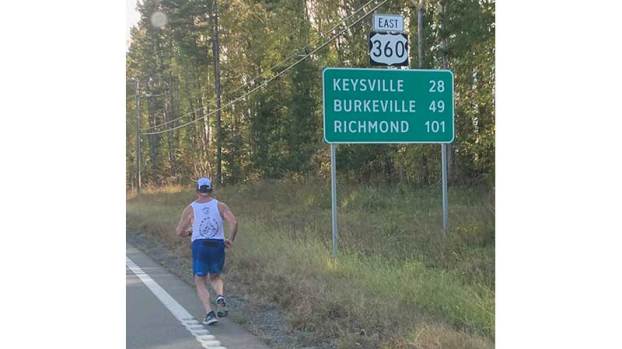 Steve Scott runs along U.S. 360, during his 168-mile run from Danville to Richmond for charity. 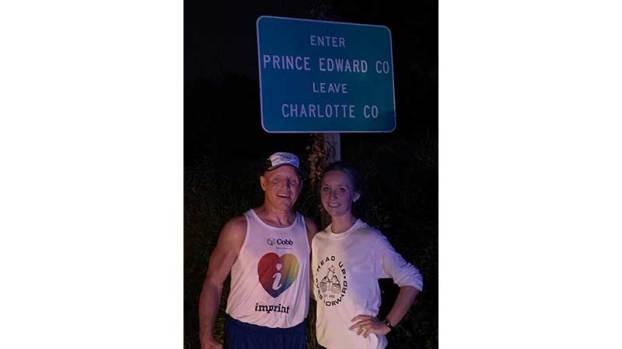 Steve Scott, left, stands with his daughter, Kelsey Moore, at the border of Prince Edward and Charlottes counties Wednesday evening, Oct. 21, after he ran 42 miles on the day in his 168-mile charity run from Danville to Richmond. Moore ran the last 3 1/2 miles with him Wednesday.

Farmville will be a key landmark this week along a trail being blazed by runner Steve Scott to raise funds for children in underserved areas of the Richmond community.

From Oct. 20-24, Scott is running from Danville to just north of Richmond City, covering 168 miles.

“I started running a few years ago and then just had an opportunity to use my running to help someone, just helping the inner-city kids in Richmond,” he said. “I just feel like God has given me a gift to use, and I just want to use my gift to give back to people.”

Scott, who lives in Danville, is a field service technician for Cobb Technologies, a Glen Allen-based company which has a 501(c)(3) charitable arm called Imprint.

CobbImprint.org stated that with Scott running an average of 30 miles per day this week, the goal of his marathon, called the CobbtoberRun, is to benefit Imprint and its mission to serve and feed children in Imprint’s local communities.

“Imprint works closely alongside local schools and other grassroots nonprofits to ensure every child has a solid foundation that will drive them towards success,” the website stated.

A YouTube video on Cobb Technologies’ channel features Scott, explaining his route for this run.

“I’ll be running 58 East toward South Boston, and I’ll be taking a left on 360 East and be headed to Richmond,” he said, as the video showed a map listing the key landmarks of Danville, South Boston, Farmville, Amelia and Richmond.

He was set to spend the night in Farmville on Wednesday and Thursday, ultimately ending up at Cobb Technologies headquarters in Glen Allen on Saturday.

Scott has individual and corporate sponsors that are contributing funds.

“I think at this point, they’re probably around $15,000, and that’s awesome,” he said Tuesday evening, Oct. 20, after his first day of the marathon.

In terms of how long it takes him to run 30 to 35 miles, he said it just depends on what the situation is.

“On a good day, five, six hours, but it took me a little bit longer today because I had a lot of hills on 58 between Danville and South Boston,” he said Tuesday. “So again, with the hills, it’s a different beast out there running.”

Scott, 59, said he first took up running at the age of 53 or 54. He had been an avid racquetball player, but when a new YMCA was built in Danville, it did not include a racquetball court.

“So I had to decide to do something else, and a buddy of mine said, ‘Let’s start running,’ so we started running,” he said.

In only five to six years, Scott has become a prolific long-distance runner that has advanced to a level few achieve.

“I did my first marathon in 2016 in Myrtle Beach, South Carolina,” he said.

Since then he has participated in other major events, including the Boston Marathon and the World Marathon Challenge.

As described on its website, the World Marathon Challenge is an amazing logistical and physical challenge to run seven marathons on seven continents in seven days, or 168 hours.

A comparative few in the world have completed it.

“It was a blessing from God for me to get through that,” he said.

When the COVID-19 pandemic interfered with Imprint’s typical fundraising opportunities this year, Scott offered to allow his running to help fill that void.

“Again, God has given me the opportunity to do this, and he gives me the strength to get through this, so I have to give him the glory for what I do,” he said.