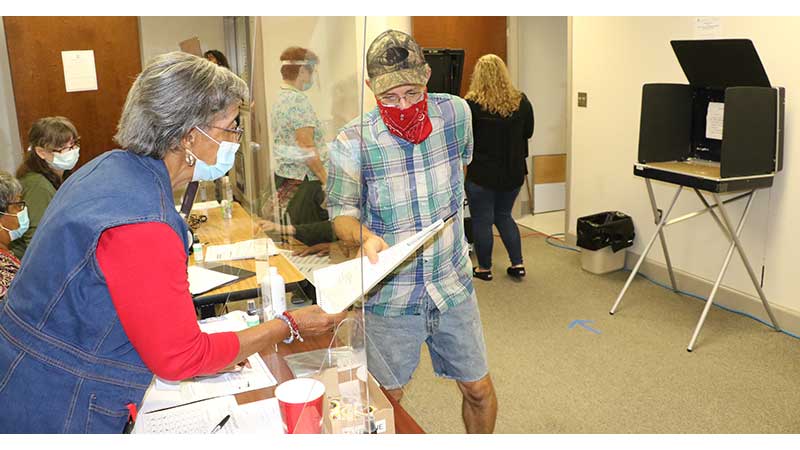 Harry Rousch accepts a ballot from Rebecca Randolph through a plastic divider during the first day of early voting Friday, Sept. 18, on the second floor of the Prince Edward County Courthouse. (Photo by Titus Mohler)

BY WILL GONZALEZ AND TITUS MOHLER

Several localities in Virginia have reported seeing a surge in people applying to be Election Day workers, despite initial concerns there would be a shortage.

Registrars in Buckingham, Cumberland and Prince Edward counties are among the areas experiencing surges in poll workers now, with it looking more likely they will have a surplus of workers come Election Day than a shortfall.

The U.S. is facing a nationwide poll workers shortage, Gov. Ralph Northam said in a tweet posted in early September, urging Virginians to apply for the position. Some districts expected a shortage because they anticipated high turnout. Poll workers fulfill a variety of part-time and full-time roles, from assisting with absentee ballot distribution, answering phone calls, supervising early voting and helping at the polls on Election Day.

“We don’t have a shortage of poll workers, and we have more people that would like to work than what we can work them,” Cumberland County Registrar Marlene Watson said Monday, Sept. 28. “I’m still waiting to actually hear from my regular workers whether they’re going to work or not, and then I’ll decide if I need any more to work.”

Prince Edward County General Registrar and Director of Elections Lynette Wright said Monday that the county does not have a poll worker shortage.

“We have had people coming in and volunteering and doing the oath just about every day. We have more than we can use,” she said.

“We’ve had 19 come in — in the last week and a half, two weeks — to apply to be poll workers,” she added. “And then of course, all of our regulars, we haven’t really had any of our regulars say they didn’t want to work yet. Of course, we won’t have that list until after Oct. 1.”

Buckingham County Registrar and Director of Elections Lindsey Taylor said Monday that her office is waiting to hear back from some of its existing poll workers, while some had called out earlier.

“But we’ve actually had a large number of volunteers contact the state and contact us directly, so I think we may end up having more than we need, but we’ll have some substitutes and things like that,” she stated.

“And then I actually had a lady call Friday, and she said that she and a few of her friends were looking to go to neighboring counties, if necessary,” Taylor added. “So I’m going to reach out to some of our surrounding counties and see where they’re at, because there’s some volunteers who are willing to go from county to county.”

Before polls opened last week, Virginia Beach said it needed 1,200 poll workers this year instead of the 800 it usually has, according to CBS-3 (WTKR-TV).

On the other hand, Arlington County posted online that it has filled “beyond capacity” its need for poll workers in its 54 precincts.

No shortage of poll workers is expected in Fairfax County, which will have more than 3,800 election officers to work the county’s 243 polling locations, about half of which are first-time poll workers, according to Brian Worthy, a Fairfax County spokesperson. The county’s 3,800 workers this year are about 500 more than it had in the last election, and extra staff is on hand to process the mail-in ballots.

“Unlike other jurisdictions that I’ve heard may be having difficulty recruiting election officers, Fairfax County has experienced a very strong interest from people who want to serve,” Worthy stated in an email. “In fact, we’ve had about 10 times the normal number of people apply to become election officers.”

Recruiting poll workers is also not an issue in Orange County, located 20 miles from Charlottesville. Donna Harpold, the county’s director of elections and general registrar, said she doesn’t know if being in a smaller county impacts volunteer availability compared to Northern Virginia.

“They obviously have the population advantage, but that may also lead to people being more wary of serving due to exposure concerns,” Harpold wrote in an email.

Lisa Betterton, general registrar and director of elections in Isle of Wight, which has roughly 37,000 residents, said the Hampton Roads county has plenty of poll workers.

Poll workers and voters have expressed concern over potential exposure to COVID-19 if polls are crowded on Election Day. Many people who volunteer at polling places across the country are retirees, the most at-risk demographic for serious complications and death from the disease.

Election officials in Washington, D.C., decided this year that working at a poll will count toward the community service hours required to graduate high school in the district.

Breaking with the tradition of voting on Election Day, Virginia’s top officials cast their votes on Sept. 18, the first day polls were open. Northam emphasized voters will have “several safe and easy ways” to vote. Over 164,000 residents hit the polls within the first week, according to the Virginia Department of Elections.

Virginia has allocated federal CARES Act funding to ensure that election officers have personal protective equipment, and Virginia Medical Reserve Corps volunteers will assist at polling places to ensure social distancing and sanitization measures are followed, according to Northam’s office.

Voters are required to wear masks. In order to limit physical interaction between individuals and to avoid voters sharing pens, Fairfax County will provide voters with “I voted” pens that they can use to fill out their ballots and keep instead of offering stickers.

The General Assembly passed several bills in the spring to make voting easier, such as turning Election Day into a state holiday, requiring no excuse to vote absentee and allowing early voting 45 days ahead of the election. Residents may vote early at their local registrar’s office from Sept. 18 to Oct. 31, or request a mail-in absentee ballot until Oct. 23, according to the Virginia Department of Elections.