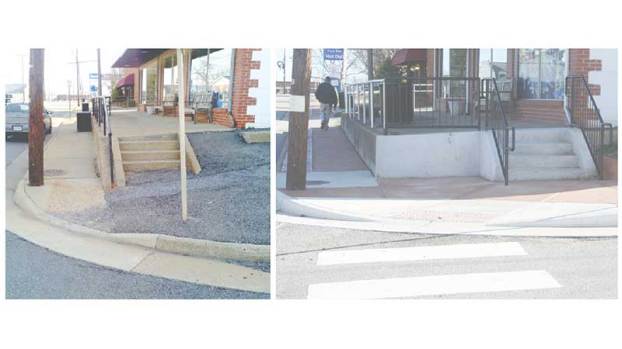 Pictured is a before and after of the steps in front of the Buckingham County Public Library that were updated and made ADA accessible as part of the Dillwyn Streetscape Project. Phase V of the project is now underway.

Phase V of the Dillwyn Streetscape Project is currently underway, bringing with it better accessibility for the town’s residents.

The project aims to enhance the appearance of the U.S. 15 corridor, improve safety and make updates in order to provide adequate access for people with disabilities.

According to Mary Huddleston, regional planner with the Commonwealth Regional Council, the original master plan for the project was developed in 2002, and the first phases of construction began in 2006.

Components for the project include new sidewalks, benches, trash receptacles and natural landscaping, including trees. If allowed, decorative period lighting will also be installed along the project area.

Phase V of the project, which began in July, will provide ADA (Americans with Disabilities Act) access in some areas currently lacking adequate access.

The Town of Dillwyn, according to Huddleston, received $1,532,000 in grant funding for the project via the Department of Transportation through the Transportation Alternatives Program, with $254,800 in local matching funds also going toward the project.

With commencement of Phase V of the Streetscape Project comes a change in traffic patterns along U.S. 15. It should be noted restricted lanes are in place to ensure the safety of motorists and construction workers as the work takes place. These changes are temporary.

According to Huddleston, construction crews will be working along U.S. 15 between Reid Super Save Market and the ABC Store, at which time the contractor, S. Walker Construction, of Blackstone, and their subcontractors will be installing new/replacement sidewalks and crosswalks, performing gutter and curb upgrades and making other enhancements.

Traffic calming measures are also being implemented, including closing one entrance on U.S. 15 to Reid Super Save Market and reconfiguring the Y-intersection at Goldmine Street to single-access.

Drivers will encounter these traffic control measures for the duration of construction, and motorists are encouraged to use extra caution when traveling through town.

Substantial completion of the project is expected by late February.

The Prince Edward CARES Act Committee met Tuesday night, Sept. 1, and completed its third round of recommendations to the... read more