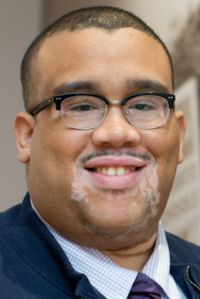 As the lead staff member for the museum, Patterson has worked to solidify a thriving partnership with Longwood University, increase the museum’s visibility around the commonwealth and at the regional and national levels, and expand programs and resources, especially for young visitors.

“Cameron has done an excellent job leading and expanding Moton’s reach as managing director,” Drexel Harris, chair of the museum’s board of trustees, said. “We are thrilled to support him in his new role as he continues to advance Moton’s mission of telling the story of how Prince Edward County was the birthplace of America’s student-led civil rights movement.”

The museum also recently added two new members to its board of trustees, Cynthia Hudson and A.D. “Chuckie” Reid.

Hudson currently serves as counsel at Sands Anderson, a Richmond law firm. Previously she served as chief deputy attorney general for the commonwealth of Virginia and as city attorney for Hampton, Virginia. She is a native of Nottoway County and was the 2019 Moton community banquet speaker.

Reid, who is chair of the Moton Museum Community Council, is a member of the Farmville Town Council and currently serves as vice mayor. He is also a member of the generation of Prince Edward County students who were affected by the 1959-64 school closings.

“Cameron’s new position and the addition of these two new trustees, as well as the recent recommendations of the Equity Action Task Force, exemplify the strength and the momentum of the partnership between Longwood and Moton,” Dr. Larissa Smith, provost and vice president for academic affairs and a civil rights historian at Longwood, said. “The Moton story is fundamentally a story of how young people used the levers of our democracy to make profound change. That’s why it is imperative that every Longwood student has an opportunity to engage with the museum.”

Smith and Patterson co-chaired the Equity Action Task Force, formed in the summer of 2020 by President W. Taylor Reveley IV and charged with helping Longwood take actionable steps this fall to address issues of diversity, equity and inclusion. To ensure that every Longwood student has meaningful engagement with Moton prior to graduation, the task force recommended infusing Moton’s history into the first-year coaching group experience and Civitae core curriculum.

“It has been my honor to lead this team and great staff during the past three-plus years,” Patterson said. “I am proud of the collective work that we have been able to do to advance the museum and its mission. I look forward to the Moton story becoming a meaningful experience for all Longwood students.”

Over the past three years, the museum has consistently served more than 12,000 children and adults annually through on-site and off-site programming. Patterson and the Moton staff are looking to bolster that further with the addition of a new virtual engagement tool funded by a $53,000 grant from the National Endowment for Humanities. The grant is being used to develop a virtual exhibit that complements and enhances the museum’s permanent exhibition, “Moton School Story: Children of Courage.”

“The past few months have been tough as we have worked to make adjustments due to the public health challenges we face,” Patterson said. “We are making the most of this moment and are excited for what lies ahead as we move forward.”