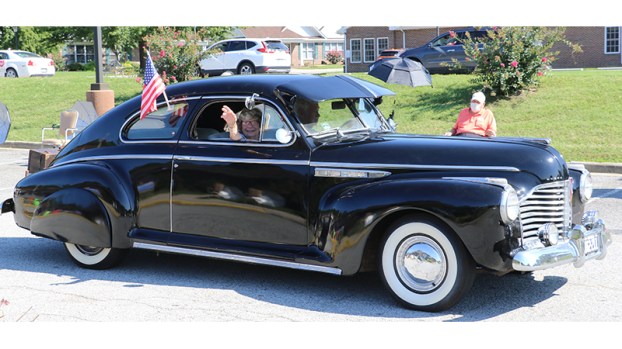 Gene Southall drives slowly through the parade as Susan Oertel waves to those along the sidewalk. 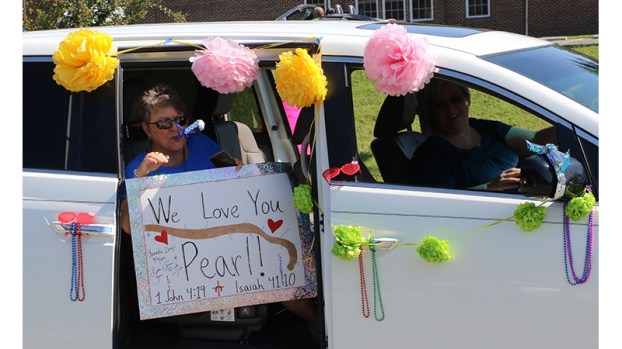 Whether it was friends and family or public servants, Monday’s drive-thru parade was full of people showing their love and appreciation for the residents of The Woodland, as much as COVID-19 pandemic restrictions will currently allow. 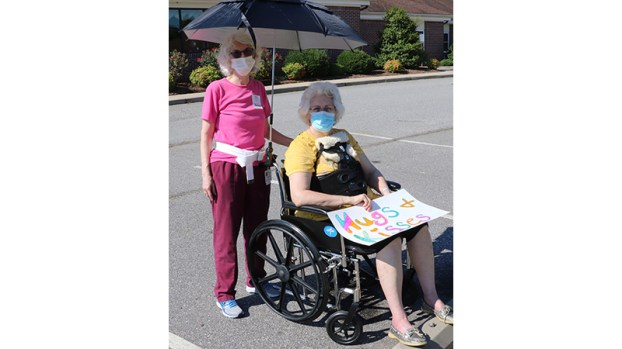 Sally Cook, left, and Donna Johnson are poised for the parade to begin.

Residents of The Woodland lined the street in front of the facility Monday morning, Sept. 7, as family and friends slowly rolled through to say “Hello!” and send their love via a drive-thru parade on Labor Day.

“The turnout was phenomenal,” David Whitus, The Woodland director of marketing and development, said shortly after the parade ended. “I think there were well over 200 cars.”

He affirmed it was more than he expected to participate.

“Particularly for a holiday morning, but we needed to do it in the morning for the residents, because as you can see, it’s already getting hot, and you put them out here in the middle of the afternoon, it just doesn’t work,” he said.

Underscoring why the parade was so important, he noted The Woodland closed to visitors the first week of March due to the COVID-19 pandemic. It had been more than 200 days since most of the residents had seen community people aside from the staff.

The parade was originally supposed to happen in June.

“The weather didn’t cooperate in June, but look at the sky (today),” Whitus said, alluding to a cloudless sky Monday morning.

He was instrumental in organizing the event.

“There are tons of people who put in tons of work,” he said.

One of them was Zach Preston, executive director of assisted living at The Woodland. He agreed the parade went very well.

“It was good to see some smiles on the residents’ faces and good to see the families back out,” he said.