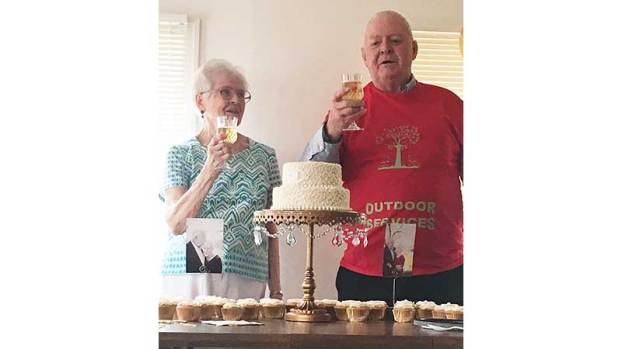 Robert C. “Bobby” Jones’ memory will live on via his many family members, friends and fellow county officials. Pictured is Jones and his wife, Jo, toasting at an anniversary celebration.

Although many knew Jones as a Board of Supervisors member passionate about his county, he was also well known as a family man blessed with five children, 11 grandchildren and 21 great-grandchildren, each of whom he welcomed into the world with wide-eyed excitement and happiness.

Born Aug. 20, 1933, Jones was a graduate of Marshall District High School in Arvonia, and spent two years at Spartanburg College before moving back to New Canton, when he began working at Solite Corporation as manager of field services. He enlisted in the Army for three years during the Korean conflict, and served 17 months in Korea, seven of which were in the combat zone. He returned home after the Armistice and spent 44 years at Solite before retiring.

Perhaps one of Jones’ biggest hobbies was turkey hunting. He co-founded the New Canton Hunt Club in 1947 with his friend, Chick Childress, and in his retirement years worked with two other hunting buddies from Arvonia to start the Grand Slam, where hunters would attempt during the season to bag a turkey in Florida, Texas, Colorado and Buckingham.

One of Jones’ daughters, JoElaine Justis, recalled there was never a Thanksgiving or Christmas in the house where wild turkey wasn’t on the table.

Jones was also a member of the Stonewall Masonic Lodge #200 for more than 62 years, and was a lifetime member and a ruling elder of more than 50 years at Arvon Presbyterian Church.

Justis recalled that during her childhood Jones always made sure to take the five kids out to spend family time each month with a fun activity such as bowling or seeing a movie, and he took his beloved wife, Jo, out every weekend.

When working at Solite, he travelled often and visited many cities, including Las Vegas. He enjoyed Vegas so much that he began taking the kids and eventually grandkids on trips there. He was a generous man who loved socializing, meeting people and telling stories.

“He was fair. He would always tell you what he thought to your face,” Justis recalled, “but he would listen to your side … He did things his way and that’s the way he was, but he respected other people for doing it their way … he was strict, but he was fair.”

“Dad was a strong, family oriented, Christian man,” recalled daughter Becky Lightfoot. “ When he would get up in front of a crowd to speak about his family, he would actually get teary-eyed and sometimes not be able to keep his composure through his speech. He had his hands in so many pies, I don’t know how he kept them straight. He had a brilliant business mind and kept that throughout his entire life, even up to his last days. He also had such a remarkable memory.   If you ever told him anything, he remembered it exactly as you told it.

“He tried to be a fair-minded good listener and I would like to think that everyone else saw him the same. I was able to spend a day with him when I transported him from UVA to Heritage Hall where he was to begin his physical therapy and then come home. Well, on our way there he asked if we could please stop at the Tastee Freeze in Dillwyn before I made the drop off.  I was more than happy to oblige. He wanted a large chocolate nut sundae, which I ordered for him.  We drove over to the nursing home while he worked on that sundae, and did not go in the place until every last drop was finished. I know he enjoyed that sundae as well as I enjoyed my last moments with him before he went in.”

Jones felt passionate about his community and was serving his third term on the Buckingham County Board of Supervisors when he passed. He was ardent on bringing business to Buckingham while maintaining the rural integrity and charm of the county.

County Administrator Rebecca Carter said Jones’ commitment to the county was evident even in his final months, as he continued to call in and stay in discussions with the rest of the board until the last few meetings. She added he was the first board member to her knowledge that passed while serving on the board.

“I valued his direction he would provide on county matters. I sure grew to admire his dedication to continue to serve the people when I know he did not feel well. I was amazed that through his illness he stayed involved,” she said.

“One thing I believe most would say is that Bobby is the type of person that you knew where you stood with him. He did not sugar coat anything, and he was a ‘straight up’ man. Bobby felt honored to serve on the board of supervisors and I believe his passing as still a member of our board is a true example of his character, that he did not give up easily on anything he felt right and worthwhile.”

Board Chairman and District 5 Supervisor Harry Bryant shared his sentiments.

“As chairman of Buckingham B.O.S. I want to send our sympathy to the Jones family. I want to say that Mr. Jones was a good supervisor with the county at heart. He was a really good friend of mine, and will be much missed on this board,” Bryant said.

“Bobby and l talked often on different issues concerning the county, and he always made decisions that were in the best interest of the constituents of District 1,” Board Vice Chairman and District 3 Supervisor Don Matthews added. “He was always talking about his children and grandchildren and how proud he was of all of them and the fact that he was from Buckingham County. Bobby and l sat next to each other at board meetings the first couple of years that he and I were on the board, and I can truly say that there was always time for a good laugh between us. Bobby had a great sense of humor. I can say that he was a real mentor to me and several other junior members on the board. He will truly be missed.”

“Bobby was the example of a servant-citizen leader. We’re so thankful for his service to his faith as a Christian, his nation when he fought in Korea, to his county as a supervisor and in his other roles, to industry as a businessman, but most importantly, to his service and duty as a husband, father, grandfather, uncle, cousin and beyond. I was most fortunate and blessed to know Bobby and serve with him,” Miles said.

“I really enjoyed working with him. He will be really missed in the county,” added fellow board member and District 6 Supervisor Joe Chambers.

“I thought a lot of Mr. Jones,” District 7 Supervisor Danny Allen stated. “He was a good supervisor and a good business person. I think he was a real help to the county, and I know we will miss him on the board and I know his family will miss him.”

“It was with great sadness when I got the news of Bobby Jones passing,” District 2 Supervisor Donnie Bryan said. “Bobby was an asset to his district and the people of Buckingham County. He always wanted to do what he thought was best for the people. He was very proud as well to be a veteran of the Korean War and spoke often about his time in the military. Rest in peace, Mr. Jones.”

Justis highlighted Jones did not want a funeral, but rather a celebration of life, after his passing. In the future, when the pandemic has dissipated and social distancing is less of an issue, his wish will be granted.

“There will be a throwdown, and he will hear it up in heaven,” Justis said.