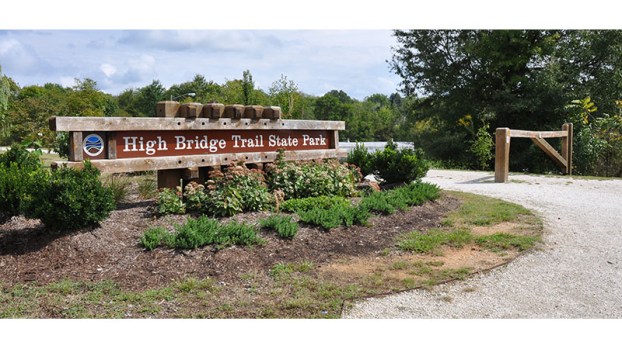 The Virginia Department of Conservation and Recreation (DCR) purchased 30 acres in Pamplin from Norfolk Southern Railroad to be added to High Bridge Trail State Park. The acquisition, 15 years in the making, will connect the trail to its planned western terminus near the Pamplin train depot.

“Ultimately, that’s what parks are for, connecting people,” DCR Director Clyde Cristman said. “We’re grateful to Norfolk Southern for their contributions and belief in our mission to preserve both natural and historic resources like High Bridge Trail, and we’re proud to present them to the public as the wonderful recreational opportunities that they are.”

“This acquisition is a momentous step toward fulfilling the park’s master plan and continuing to bring economic development to Central Virginia in the original spirit of the rail line established over 150 years ago,” Virginia State Parks Director Melissa Baker said.

Originally chartered in 1846, the South Side Rail Road connected Petersburg to Lynchburg, transporting goods and people far more efficiently than the canal systems in place at the time. Not wanting to miss the historic economic opportunity, residents from the town of Farmville petitioned the railroad to bring the track through their community and promised to purchase $100,000 in company stock. South Side Rail Road agreed and plotted a new course through Farmville that would span the Appomattox River and led to the construction of High Bridge. In 1854, the bridge was completed, establishing the route as it is known today.

In 2006, Norfolk Southern donated 31.2 miles of track to the Virginia Department of Conservation and Recreation, which converted it into High Bridge Trail State Park.

“It’s the biggest thing that could happen for Pamplin,” Mayor Sarah Hamlett BlackweIl said. “Small, rural communities like ours are prone to being left behind, but here we have this amazing opportunity to redefine ourselves around the current trends in recreation and ecotourism.”

Norfolk Southern kept a mile of track on both sides of its original 2006 donation for logistical and storage purposes. Pamplin residents and business owners have been anticipating the trail’s arrival ever since. Their revitalization efforts are evident in the small business district; several buildings have new facades and visible improvements throughout. The train depot, owned by the town, was recently renovated and is now home to regularly scheduled community events like music, yoga classes and movie screenings. The town went as far to lease an additional plot of land from Norfolk Southern to ensure future patrons of local businesses will have a place to park.

“Setting up Pamplin to act as an anchor for the trail is a huge step forward for the park and the public,” Park Manager Daniel Jordan said. “It’s invaluable to us to finally have a true western terminus, but it’s really a mutually beneficially development between the park and Pamplin.

“While it’s hard to contain my excitement over this milestone, we still have a long way to go,” Jordan said. Additional funding is still needed to clean and clear the corridor, prepare the trail surface, and install gates and signage, but Jordan is optimistic that with help from the community and volunteers, they can begin early phases of development.

“We are so appreciative of DCR and of Norfolk Southern for continuing to pursue the trail’s completion and passing this opportunity along to Pamplin,” Hamlett Blackwell said.

According to the Virginia State Parks 2019 Economic Impact Study, High Bridge saw more than 130,000 trail users during the 2019 calendar year and generated $532,000 in state and local tax revenue.

“We are going to cater to trail traffic as much as possible,” Hamlett Blackwell said. “Even if it’s only 5 to 10% of the visitors that use the trail, it will make a tremendous difference in this community.”

When the new section is complete, High Bridge Trail State Park will span 32.2 miles from just outside Burkeville in the east to Pamplin in the west.

Eighteen area businesses were recently the beneficiaries of a total of $20,000 in grant money from the Town of Farmville... read more