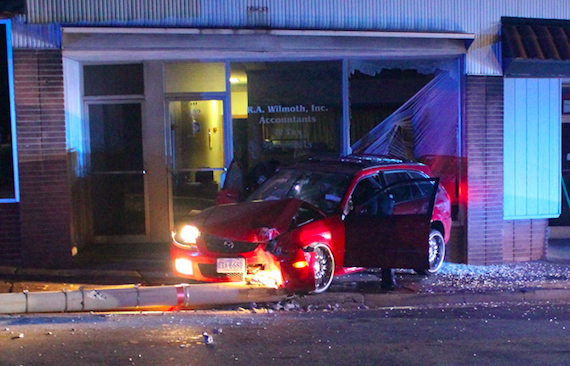 Antuawn Turner, 47, of Cumberland, was arrested Friday night after a short vehicle pursuit that ended in a crash on High Street in Farmville. (Photo by Dan Pempel)

A short vehicle chase Friday, July 3, in Farmville led to a single vehicle crash and the arrest of Cumberland resident Antuawn Turner.

According to Farmville Deputy Police Chief and Deputy Captain Bill Hogan, the call came in at approximately 9:40 p.m. Friday night.

The crash occurred at the end of a brief vehicle pursuit that began after police attempted to pull over Turner, 47, after he made an illegal pass of another vehicle on South Virginia Street.

When Turner refused to stop, a brief chase ensued. Turner lost control of his vehicle, a red 2002 Mazda, as he was turning onto High Street and crashed into the Wilmoth Accounting & Tax Services building, breaking the glass window and taking out a street light and power line in the process.

The offender then fled on foot before being taken into custody in the 100th block of Main Street.

Turner was taken to Piedmont Regional Jail in Farmville and charged for felony eluding police, driving under the influence of alcohol, refusal of a breath test, no drivers license, reckless driving and obstruction of justice. More charges are pending.

After having been apparently free of the novel coronavirus since June 1, Piedmont Regional Jail (PRJ) had 12 positive cases,... read more