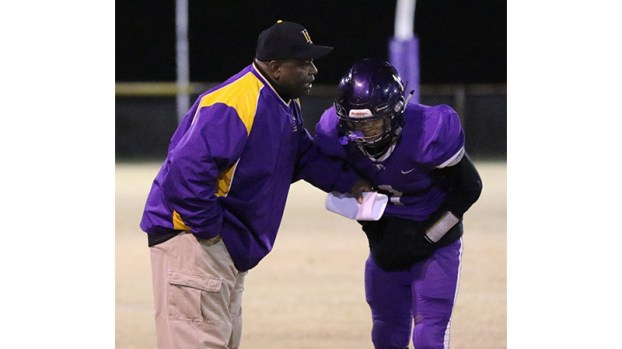 Prince Edward County High School Varsity Football Head Coach Larry White, left, gives instructions to quarterback Nate Reed during the 2019 season. White said he is frustrated not to be able to lead the Eagles on the gridiron this fall but hopes to do so this spring. (Photo by Titus Mohler) 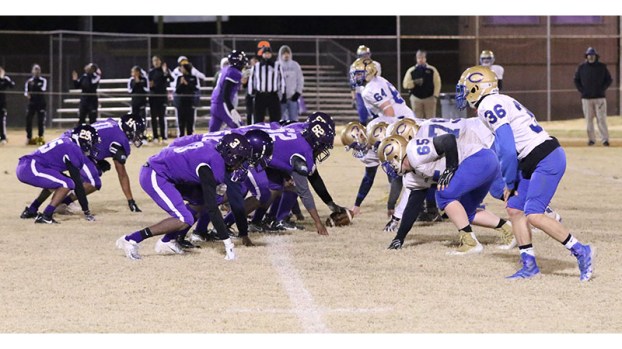 Prince Edward and Cumberland High Schools meet on the gridiron last season on a cold fall Friday night. If the two teams meet this season, it will be in the spring of 2021. (Photo by Titus Mohler) 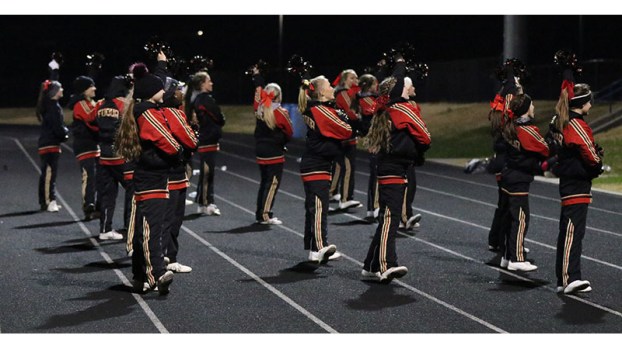 Fuqua School football cheerleaders, these cheering at the 2018 state championship game, may yet have something to cheer for this fall at the football field. Fuqua Athletics Director Mike Edwards said there is a 50/50 chance the Falcons will still play then, and they should find out for sure Friday, July 31. (Photo by Titus Mohler) 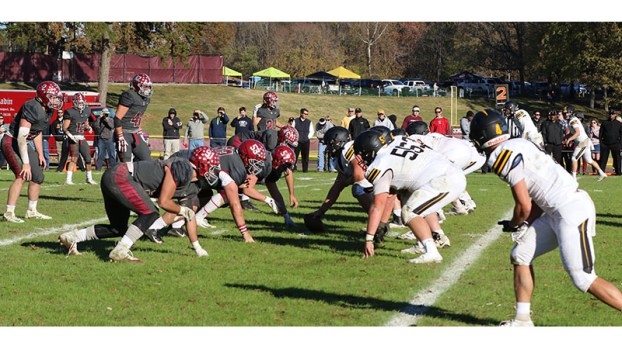 Hampden-Sydney College’s football team, left, will not be competing on Saturday afternoons this fall, but the hope is the Tigers will return to the gridiron in the spring. (Photo by Titus Mohler)

The fall of 2020 will be defined, in part, by a startling absence.

As of Wednesday, July 22, it was confirmed that due to the COVID-19 pandemic, there will be no football played this fall by the public high schools of Buckingham, Cumberland and Prince Edward counties, by Hampden-Sydney College or by the Farmville youth tackle football league.

The efforts and heroics of area athletes on the gridiron help shape Friday nights or crisp Saturday afternoons for many people in the community.

The atmosphere of football games is kinetic. It includes the thrilling sight of a big play on the field, the exciting sounds of the crowd, the cheerleaders, the marching bands and the wafting aroma of food from the concession stand.

The absence of football will have a significant impact on people all over the area, from coaches, to players, to parents, to fans and more.

“To be honest, it’s been very frustrating,” he said. “We were looking forward to a pretty good season. We had a lot of seniors back, and this would be my second year.”

White said he is still working on his playbook, trying to prepare for the possibility of a spring football season, which is something the Virginia High School League may opt to do.

He said he has not been allowed to do any practices or workouts with his players so far.

“I know a lot of kids ain’t doing nothing right now,” he said. “It’s getting kind of stressful.”

He holds out hope for the spring possibility, though.

“Hopefully they allow us to do something in the spring, even if we just play district games, play our district,” he said. “Give these seniors something. This year’s seniors, they couldn’t play any spring sports. So don’t take away (from) the upcoming seniors, because it’s going to be hard. Some of them might want to go college and some of them probably didn’t do well as a junior (and) might come back as a senior this year (and excel).”

Eagles rising senior Kiyou Jones is one of White’s players who wants to attend college and play college football too.

Jones said he had already been facing difficulties when he actually received the news of no fall football from his basketball coach.

“He was like, ‘I’m sorry about your season, Kiyou,’” Jones said. “And so when I got the news, I was hurt a little bit. But then I took the opportunity and it’s just like, now I have more time to develop the skills that I might have been missing or lacking in to go and play at a higher level. Even if we don’t have a season, I plan to continue my football career. But, ‘Where is that?’ is the issue.”

The pandemic has also altered the state of college athletics recruitment. Jones said he has not drawn interest yet from college football programs, but he has been emailing them. He noted everything has been up in the air due to the novel coronavirus, but he highlighted the positive in the situation.

“It’s just given me the opportunity to take real initiative to take my own recruiting and my own furthering of my career into my own hands,” he said.

In the meantime, he is also holding out hope for a spring football season in 2021.

“In my mind, I just think positive and just go with the thought that God has a plan for whatever is going to happen, so just keeping that in mind, have faith in whatever God wants and wherever He’s going to guide us, and it just gives me enough to stay OK with the fact that it’s a total possibility that football might not happen,” he said. “Until I know for certain it’s not happening, I’m going to keep working hard and perfecting my craft.”

Quarterback/cornerback Gerry “Tae” Toney was a big reason why the Buckingham County High School Knights returned to form last year, advancing as far as the Region 2B semifinals and finishing with an overall record of 10-2. Toney had many reasons to be excited about this fall.

“First, this is my senior year,” he said. “I wanted to play, but I know there’s bigger things going on in this world today, so that kind of let me know that I had to put it aside. But I’m still working on my body, waiting for that time to come back around.”

Toney said he is really hoping for spring football to happen. He had a couple colleges express interest in him after his excellent junior season, but he is counting on his senior season to help expand that number.

Lyla Wood, who has faithfully photographed the Knights football team from the sidelines for years, said she is experiencing a mixed bag of emotions at the canceling of fall football.

“(I’m) upset for the upcoming seniors, not being able to move forward from last year’s momentum and success,” she said. “Myself and the players are missing connections and togetherness, teamwork and the feeling of anticipation and excitement on the field. I’m sad to not capture memories for them. I’m disappointed that football seems to be the only sport not even considered.”

Elijah Warner, recently graduated star quarterback for Fuqua School, was preparing for his freshman year playing for Hampden-Sydney when he found out in a Tuesday, July 21, team meeting there would be no fall season.

“I didn’t really think that it would happen in college, but it’ll give me more time to get ready for the season, and it’ll give me a better chance to get more playing time on the field, but it still sucks.”

He said the current plan for the Tigers is to play a full regular season in the spring.

His father, Gregory Warner, had been excited about getting to see his son continue his football career locally, and Elijah was going to be playing alongside a couple of other Falcons-turned-Tigers this fall. But then the news came.

“I think that it is a big disappointment for a lot of the freshman and senior players at the college level, for that matter,” the elder Warner said. “Of course, as fans of Hampden-Sydney and Fuqua School, we are very disappointed in it. And I think this COVID-19 thing is not what it’s cracked up to be, and the kids are suffering because of it. But that’s my thought.”

Gregory Warner said he tried to stay positive with his son when they talked about the news.

“What I did tell him was I think that it may be an opportunity for him to work out and to get bigger and to get stronger before he is put in the college level,” he said.

He added that if the restrictions on playing continue, football programs are going to lose a lot of good football players.