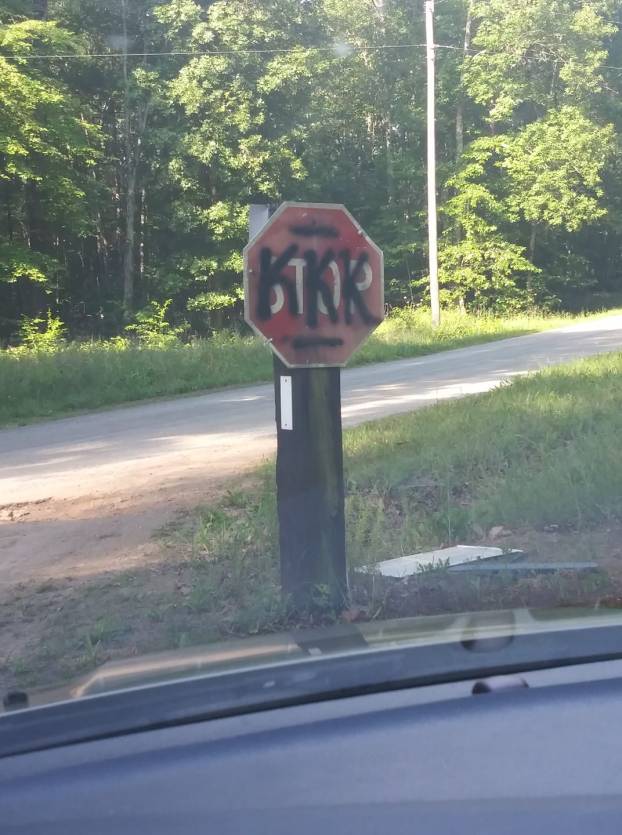 A stop sign on a private driveway in Buckingham County was spray-painted to display the letters “KKK” Thursday, June 25. The Buckingham County Sheriff’s Office is asking anyone with information regarding the crime to contact the office at (434) 969-1772.

A stop sign in Buckingham was vandalized Thursday with graffiti displaying the acronym of the Ku Klux Klan, sparking fear and anger in a period of national tension surrounding violence against Black citizens.

“What did we do to deserve this?” were the words of Nicole Page-Spradley, 37, of Buckingham, as she reflected upon the events of the last 24 hours.

Page-Spradley, who lives on Union Hill Road, said her husband was leaving for work Thursday morning, June 25, when he discovered a stop sign at the end of the family’s driveway had been vandalized.

The sign, discovered at approximately 8:30 a.m. that morning, had the letters “KKK” spray painted on it.

Page-Spradley said when she first learned about the act, she went into “protection mode” for her children and her husband’s sake. Her husband is Black, and her children are biracial. The two-home driveway is located in Union Hill, a predominantly African American community. She said she felt the family was being targeted.

Page-Spradley took to Facebook Thursday to share a picture of the vandalized sign and voice her frustrations and fears about the crime. The post had garnered 230 reactions, 171 comments and 177 shares as of Friday afternoon.

“Our neighborhood is very quiet and nobody bothers nobody,” she said. “We’ve been living there for almost six years and nothing like this has ever happened on our road.”

Page-Spradley said the incident ignited fear of whether or not the perpetrators would return to the area.

She said after giving a statement to the Buckingham County Sheriff’s Office, her husband was told since the sign wasn’t on state property VDOT (Virginia Department of Transportation) could not touch it. Her husband took the sign down himself.

“I would want to know, why us?” she asked. “My family doesn’t bother anybody, so why do you have to come for us? What did we do to deserve this?”

Buckingham County Sheriff Bill Kidd said Friday the office had not received reports of any similar incidents within the recent time period. He asked anyone with any information about the crime to contact the sheriff’s office at (434) 969-1772.

Losing a loved one to COVID-19