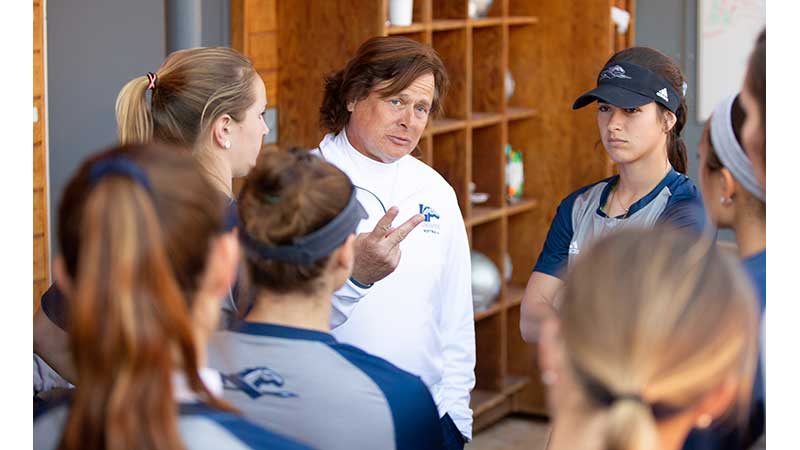 The historic coaching career of Longwood University Softball Head Coach Kathy Riley came to a close Friday, June 26, as she announced her retirement.

From her perch in the dugout, Riley built Longwood softball into one of the most dominant dynasties the Big South Conference has ever seen. As keynote speaker at Longwood’s 2019 commencement ceremony, she charged the entire student body to believe in themselves, take risks and never stop getting back up.

Now, upon announcing her retirement at the end of a decorated 27-year coaching career, Riley cements her legacy as a softball coach who grew into one of the most prominent and long-standing flag-bearers Longwood has ever seen.

Riley’s announcement closed the book on a 27- year run highlighted by 812 career wins, five Big South Championships and seven trips to the NCAA postseason. With an 812-488-1 career record, with a .625 winning percentage, and a 722-400-1 mark in her 23 seasons in Farmville, with a .644 winning percentage, she steps away as the winningest women’s varsity coach in Longwood’s 100-year history of athletics.

“Throughout her career, Kathy has left an indelible mark on the lives of countless student-athletes, colleagues and Longwood athletics through her passion for developing leaders and her insatiable drive for excellence in competition, academics and service,” Longwood Athletics Director Michelle Meadows said as a 15-year veteran of the athletics department.

“The success of the softball program under Kathy’s leadership extends well beyond the remarkable record and conference championships to include stellar graduation rates and a lineage of student-athletes equipped to leave their mark as true citizen leaders,” Meadows continued. “I am deeply grateful for the impact she has made and the legacy she has left on us all. We wish her the very best in her retirement and know she will continue to leave her mark in the lives of others.”

Longwood found success at every turn under Riley, from two-time champion of the Division II Carolinas-Virginia Athletic Conference (CVAC) in the early 2000s, to underdog Division I Independent, and most recently as the gold standard of the Big South Conference. The Lancers never finished below .500 under Riley and punctuated her legacy by winning five of the past seven Big South titles, a run unprecedented in the conference’s 33-year softball history.

Each of those five Big South titles earned Longwood trips to NCAA Regional play, giving the Lancers seven total trips to the NCAA postseason under Riley, which is more than any other program in school history.

And Longwood did more than simply show up at those NCAA Regionals, twice advancing Cinderella-style to the pod’s championship game, with title bouts against James Madison University in 2016 and the University of Tennessee in 2017, both of which were ranked in the top 10 in the nation at the time.

All the while, Longwood softball achieved parallel excellence off the field, leading the Big South in Academic Progress Rate (APR) score in six of the past nine cohort cycles. Twice during that span, the program achieved perfect APR scores of 1,000, including the 2017 report that included three Big South championship teams.

“It’s been a privilege to be the softball coach at Longwood University these past 23 years,” Riley said. “One of my greatest joys in life is having that special bond with our players, one that can’t be replicated in many other areas of society. I am forever grateful to the players who believed in us and our vision.

“Thanks also to my friends in the athletics department and on campus; Longwood has been a special place because of you. The support we received from university presidents, athletics directors, assistant coaches and our great fans was instrumental in the softball team’s ability to have sustained success. To my assistant coaches, much love for the commitment and sacrifices you made. Thanks all of you, and I will look forward to seeing everyone as our paths cross in the future.”

Riley recruited and mentored some of the most decorated student-athletes to ever come through Longwood, from All-Americans and Big South Players of the Year Megan Baltzell and Brooke Short, to two-time Big South Pitcher of the Year Elizabeth “Biz” McCarthy, and the recently enshrined Big South All-Decade selections Jordan Clark, Karleigh Donovan, Sydney Gay and Emily Murphy.

In the Lancers’ seven-plus seasons in the Big South under Riley, the program amassed three Big South Player of the Year awards — Short in 2013 and Baltzell in 2015 and 2016; two Big South Pitcher of the Year accolades — McCarthy in 2015 and 2016; and five Big South Tournament MVP selections — Libby Morris in 2013 and 2015, Gay in 2016, McCarthy in 2017 and Donovan in 2019. Those awards are in addition to the 44 All-Big South recognitions Longwood softball has earned since 2013, more than any other Big South program.

Meanwhile, Riley was named Big South Coach of the Year in 2015, 2016 and 2019, all years in which the Lancers won the Big South title. In each of her seven full seasons in the Big South, Riley led Longwood to three regular-season titles, and it never finished lower than third place in the final standings. Twice the Lancers amassed 20-4 league records, and since their inaugural season in the Big South, the program has won 45 of 53 series — 85% — against Big South foes.

“A portion of Kathy Riley’s success can be measured, be it by wins and losses, championships or the trophy shelf full of awards she and Longwood softball have earned,” Longwood President W. Taylor Reveley IV said. “But what can’t be quantified, and is undoubtedly more important, are the positive transformations she catalyzed in her student-athletes and the nationally relevant platform to which she consistently placed Longwood.

“At a time when some questioned whether Longwood could compete at the Division I level, Coach Riley blazed a trail that many of her Longwood coaching peers are now following. That she did so, while at the same time producing class after class of well-rounded citizen leaders, speaks to her unique gifts as a teacher, mentor and leader. Her legacy at Longwood will likely be represented by the countless records her teams broke and milestones they achieved, but those who played for her and worked alongside her know that her impact extends well beyond any scoreboard or trophy.”

But Longwood’s success under Riley went well beyond the Big South era. She became head coach of the then-Division II Lancers in the fall of 1997 and shepherded the program through the transition to Division I. Beginning in her debut season in 1998, Riley immediately elevated the Lancers into a CVAC contender and secured CVAC championships in 2002 and 2003 to put an exclamation point at the end of the university’s Division II era.

Riley’s winning ways translated immediately at the Division I level when her program made the quickest adjustment of any Lancer team to the highest level of college athletics. In 2005, Longwood’s first year playing a full Division I schedule, Riley’s Lancers rattled off 32 wins, including a doubleheader sweep of commonwealth giant University of Virginia and in-state victories over James Madison, Norfolk State University and Radford University.

That Division I debut was the first of 15 consecutive winning seasons at the D-I level for Riley, giving her the top coaching resume of any Lancer coach in the school’s 16-year D-I era.

In total, Riley has coached her Longwood teams to 15 30-win seasons, including three 40-win performances since joining the Big South in 2013. The Lancers were in line to continue their dominant run in 2020, entering the spring as the Big South’s preseason favorite for the fifth consecutive year before the season was cut short in mid-March due to COVID-19.

Those highlights consistently put Longwood University in the national spotlight as well, both from Farmville and on the road. The Longwood campus’ first nationally televised game in the Division I era took place at Lancer Field on April 8, 2018, and saw Riley’s Lancers take down Liberty University 3-2 in dramatic, walk-off fashion on ESPNU.

That historic broadcast from campus was in addition to multiple NCAA Regional showdowns and in-season matchups against high-major powerhouses and Big South rivals that annually earned Longwood airtime on ESPN2 and ESPNU, as well as the program’s appearances in nationally televised NCAA Selection Shows and the plays of multiple student-athletes highlighted on ESPN SportsCenter’s daily Top 10 countdown.

Now in the wake of Riley’s retirement, the university will begin a nationwide search to find the next head coach of the Longwood softball program.