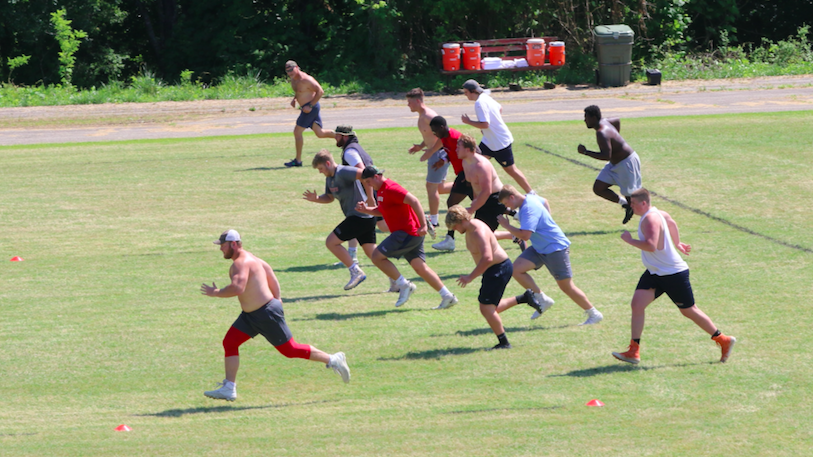 Virginia Military Institute (VMI) rising senior offensive lineman and former Fuqua School standout Brad Davis leads a group of fellow VMI football players in a practice session Friday afternoon, June 12, at Fuqua. At top, Davis’ father, Fuqua Assistant Head Coach Rick Davis, participates while supervising the session. “Because the whole COVID-19 thing, everything for everybody is player-led right now,” Coach Davis said, referring to practices. “Brad decided to see if he could get the o-line together, and so they spent the night over at one of the lodges over at Bear Creek (Lake) State Park both Friday and Saturday night. … And came in Friday afternoon and did a workout on the field. Then they went up and they were in the weight room for another hour and a half after that. They were in the classroom beforehand. We actually went to my classroom, and they did a bunch of board stuff and a bunch of film study stuff.” He said his son and the other VMI players were there for four or five hours Friday and a couple more Saturday, June 13. Brad Davis, who is preparing for his final season with the Keydets, has shined on the gridiron and also in the classroom. A mechanical engineering major, he was the player on the VMI football team with the highest GPA in the fall 2019 semester and also the spring 2020 semester.