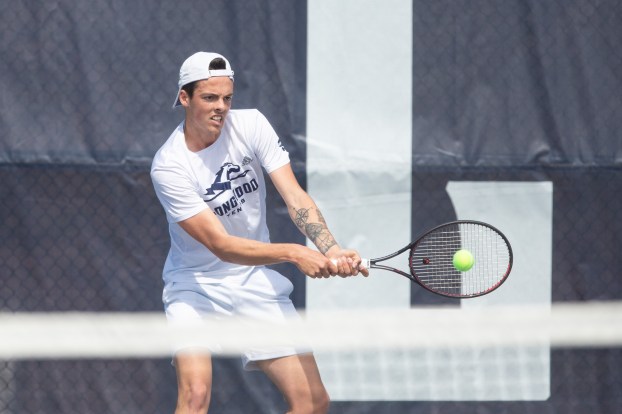 Tuesday, June 16, the trailblazing ace from Valencia, Spain, put Longwood tennis on the map yet again.

The Big South Conference honored Blasco with not one but two spots on the Big South Men’s Tennis All-Decade Team presented by Hercules Tires, making him one of only four players to earn both singles and doubles recognition on the list of the league’s best tennis standouts from 2010-2019.

The appointments came in Longwood’s first decade as a member of the conference and put Blasco in the company of the league’s past All-Americans, Players of the Year and multi-time all-conference honorees.

Blasco was one of eight players selected to the Big South All-Decade singles team, one of nine on the doubles squad, and one of four on both lists alongside UNC Asheville’s Henry Patten, Radford’s Ivan Salec and Gardner-Webb’s Maximilian Scholl.

The all-decade awards are byproducts of a record-breaking career for Blasco, who has been rewriting Longwood’s record books ever since he was named Big South Freshman of the Year in 2017.

Blasco has climbed those leaderboards under two different head coaches at Longwood, first under Pierre Tafelski in 2016-17 and then under Jhonnatan Medina Alvarez in the three seasons since. Under both of those mentors, Blasco has played almost exclusively at the No. 1 singles slot for Longwood and amassed four consecutive 20-win seasons, including a program-record 30-win campaign in his first year under Medina Alvarez in 2017- 18.

The Big South All-Decade Team selections are the latest in a long list of awards for Blasco, who is the first Lancer in program history to earn three consecutive All-Big South first team awards. He has also been a nationally ranked singles player by the Intercollegiate Tennis Association twice, making him the second Lancer to receive that recognition and the first to do so in two different seasons.

Blasco entered his senior season primed to add to that list and take the mantle as the best player in the Big South, jumping out to a 22-10 singles record and a 13-7 mark in doubles play. He set the tone early in the fall when he was chosen to represent the Big South Conference at the ITA Oracle Masters, a national tournament in Malibu, California, comprised of the top collegiate tennis talent in the nation. He went on to win the Big South Fall Invitational with a dominant 5-0 showing at the tournament and reached the round of 32 at the ITA Atlantic Regional.

Blasco capped the spring portion of the 2019-20 season by winning his final six bouts, including four consecutive straight-set wins over his No. 1 singles counterparts from Mount St. Mary’s, North Carolina A&T, George Washington and USC Upstate.

And while his senior season came to a premature close, Blasco is not done yet. He will return to Longwood for an extra year of eligibility in 2020-21 to pursue more awards and records along with his master’s degree in business administration.

With Blasco, Spencer and Wallace already earning Big South All-Decade Team honors, the conference will continue to roll out its sport-by-sport lists this month.