Teachers of the Year announced

Emily Wilson Overstreet was named Teacher of the Year for Cumberland Elementary School.

Overstreet has been teaching art at Cumberland Elementary for 11 years. She is a graduate of Longwood University, where she earned a bachelor’s degree in art education and graphic design. Overstreet said she knew from a very early age art would be a significant part of her life. 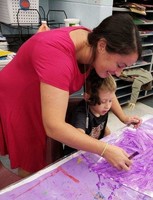 After graduating from Longwood, she returned home to Maryland and entered the graphic design field. Soon realizing that life behind a desk was not for her, she returned to college to earn a teaching license. Upon receiving her license, she immediately began teaching at Cumberland Elementary and has called CCES home ever since.

In addition to teaching art, Overstreet serves on the school leadership team and as the chairman of her department.

Tara Denzler Harmon was named Teacher of the Year for Cumberland Middle School. She has only been at CMS for a year, but has taught special education for 19 years. Harmon noted she has had the opportunity to teach at the elementary, middle, and the high school levels and has taught in five different states. She has a bachelor’s degree in social work from Ferrum College and a degree from Virginia State University in special education. She holds a Virginia teacher’s license in Specific Learning Disabilities K-12. This year she has been involved with the Assistive Technology Team, the Virginia Tiered Systems of Supports (VTSS) Team, and the Co-Teaching Support Team. She also had the opportunity to work with Longwood University as a cooperating teacher, stating that she has thoroughly enjoyed having a student teacher to collaborate with and mentor.

Sgt. Major Dwayne Andrew Tigs, who is in charge of the JROTC program, was named Teacher of the Year for Cumberland High School. He holds a Master’s of Art degree in Management and Leadership from Webster University. He has taught for five years at Cumberland High School, instructing students in JROTC levels one through four. He believes in public service. For the last several years, his cadets have participated in the presentation of the colors for all school board meetings, major school events, sporting events, and Veterans Day ceremonies. He also has the cadets participate in Cumberland’s annual, district-wide Betty Scales Day of Service and in the Cumberland Christmas Parade. They have also performed work with Feedmore.org and volunteered with Delma’s Pantry as well as at the Lonesome Dove Equestrian Center. In addition to teaching, Sgt. Major Tigs served as a member of the Superintendent’s Teachers Cabinet, the School Threat Assessment Team, and the Cumberland/Louisa 2019-20 VaLin Cohort Deeper Learning Networking Team.

This year, he has also served as a mentor to nine seniors in their efforts to complete their senior projects.

Twenty-two students from Cumberland Middle School were rewarded for hard work and good behavior after they each won a free... read more