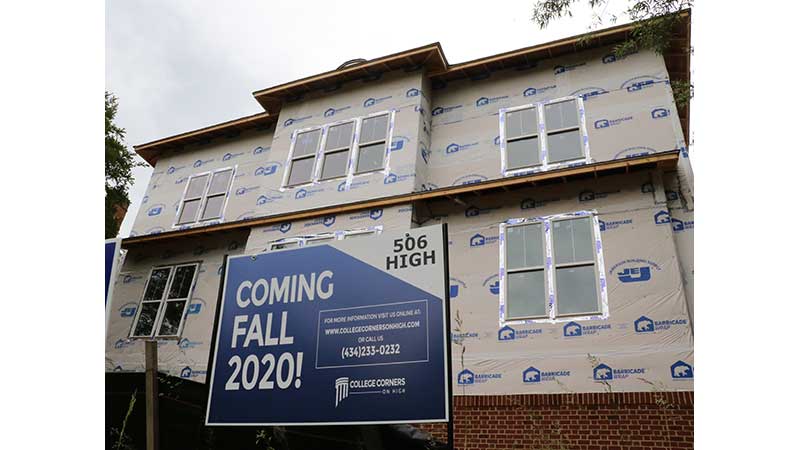 This housing project by Robert Martin on High Street near Longwood University began this spring. It took Martin nearly three years to obtain the necessary permits for the project from the Town of Farmville. (Photo by Titus Mohler)

This edition of Imagine Farmville looks deeper into the housing challenges that surround the region, including in downtown Farmville and Prince Edward County, and the steps being taken to address them.

‘DON’T THINK WE ARE CLOSE TO BEING DONE’

Louis Gould, who graduated from Longwood University in 2019 and is currently a teacher with Prince Edward County Public Schools, knows firsthand the challenges of finding housing as a recent graduate and as someone in their 20s.

Finding an apartment or housing unit that is close to the school system has been a challenge.

“There are a lot of barriers,” Gould said.

Even with a salary, Gould said places to live, particularly for young people and for teachers who need to live near the school district, are often filled as soon as they become available.

Louise Waller, Longwood vice president for administration and finance, said Wednesday, May 27, that Longwood has been aware of the need for housing, particularly for recent graduates.

“Longwood has been involved in conversations about a variety of housing needs for our community, including housing at a price point affordable for recent graduates or young professionals,” Waller said. She said the opening of Curry Hall in the coming months will provide on-campus housing for students.

Matt King, CEO of Walk2Campus, said in a Wednesday interview that the organization had previously explored the possibility of constructing a building with one-bedroom units in an area of Third Street and North Street that currently serves as the Walk2Campus parking lot and had formerly been a Wells Fargo drive-thru.

While there were initial zoning complications, King said the main complication had been construction costs.

King said in recent years, costs for labor, including electricians and plumbing, have risen. Materials have also risen in costs, in part due to a booming economy prior to the coronavirus and trading issues between different countries.

Those costs must be considered when developing housing, King said, and the construction cost was 20% higher than initially estimated.

But King said the organization is still interested in the project and is working to continue maintaining and developing affordable housing for students, all that are less than a quarter of a mile from the campus.

Trying to keep housing affordable, and comparing different housing markets in college towns can be difficult because there are numerous factors that contribute to price, King said.

There’s location to campus, the cost for materials, and the cost to maintain the apartment or rental once it is established, he said.

A goal for the organization is to be neighborly, and King said he has taken the community into consideration with any decisions that are made. Though few imagined having to make decisions around a pandemic.

He estimates that Walk2Campus has invested in the Farmville area for 17 years.

“We don’t think we are close to being done yet,” King said.

Finding housing that is affordable and accessible in the area poses challenges that span numerous demographics. According to a March report, the average home purchase price in Prince Edward was $164,750 in 2018, making it the third-highest rate in the seven-county area studied. Prince Edward came behind Amelia County at $205,000 and $165,000 in Appomattox.

Average home prices necessitate an annual salary of $42,000 for home ownership and $31,800 for rentals, the study cited.

Though there is room for hope. Three of the five largest employers in the area (Longwood University, Centra and Walmart) are located in Prince Edward County. According to the study, 12 of the 15 growth occupations in the region are in healthcare, with an average salary of $35,647.

There will be a demand for 48 houses on average per year for the next decade, according to the study.

Current rental rates are out of reach for 2,489 households in the study area. But there are only 240 subsidized housing units.

To meet this need, the region would need 435 additional rental units at or below 50 percent of the Area Median Income (AMI). Affordable rent for a two-bedroom home at the AMI is $632. For a one-bedroom, it is $527.

Households comprised of seniors will make up the fastest growing demographic in the coming decades.

The Prince Edward Housing Coalition is headed by STEPS and Piedmont Habitat for Humanity, as well as the Town of Farmville, Hampden-Sydney College, and Longwood University among other organizations.

Sharon Harrup, president and CEO of STEPS Inc., which provides housing, education and workforce services and opportunities, said in a statement the next step for the housing coalition is to plan out its future based on the study results.

“We are looking for this plan to provide guidance on financing options, housing types and numbers of each housing types,” Harrup said. “This includes affordable housing for all income levels, individual and/or families of all sizes. One of our stated values is to ensure new developments create the opportunity for mixed income housing with the possibility of rental and home ownership options.”

COVID-19 and subsequent loss of income due to job loss has made it more difficult to afford rent and mortgage payments, and the potential for individuals and families to experience homelessness becomes greater.

Due to the increased precautions from shelters in nearby areas such as Richmond and Lynchburg, and not having a homeless shelter in the region, organizations such as LOC Family Services and STEPS will often place people in hotels, where costs quickly add up.

“We are finding that trying to help people transition from incarceration to successful transition into the community is difficult because of the lack of affordable housing in our area,” Shelley Mays-Couch, project director of LOC Family Services, said in a statement.

“It is difficult to meet the needs of those who are homeless,” Mays-Couch said. Many of the people the organization serves are among those who face barriers to affordable housing, an issue exacerbated by the coronavirus.

Another barrier for nonprofit organizations is funding. Funding raised through the Soup & Sandwiches fundraiser by STEPS for its homeless services has already been spent, and there are strict guidelines for screening potential state funding recipients.

“At times, both clients and STEPS staff are frustrated when we are not able to meet all of the needs in our communities,” Harrup said.

Following the implementation of Phase One reopening of Virginia, courts can now hear non-emergency cases, including eviction cases. Prince Edward County General District Court Clerk Danielle W. Bagley said in a Tuesday interview that the county has not held an eviction case hearing since the Virginia judicial emergency for the coronavirus was enacted March 16.

Tenant rights remain a priority during the pandemic. No tenant can be evicted without a court order, despite what’s written on a lease, according to documentation from the Virginia Legal Aid Society and the Virginia Poverty Law Center. Similarly, no landlord can cut off heat, water, gas or electricity without a court order. To learn more, call 1-866-LEGL-AID, 1-833-NoEvict, or visit vlas.org.

Homeowners may be able to receive up to 180 days of mortgage forbearance, or other necessary assistance with mortgage payments, as a result of the Coronavirus Aid, Relief, and Economic Security Act (CARES).

Numerous aspects related to housing could see changes in the future, for families, students and young adults. The real estate industry may also see changes.

Navona Hart from Real Living Cornerstone in downtown Farmville said since the pandemic began, she has received more requests to hold virtual tours and meetings through technology such as FaceTime.

“I think that will continue,” Hart said about the use of video conferencing in the real estate market. “It is a prime way to have a first conversation with someone about a house.”

In observing trends from homebuyers or those interested in looking for a home, Hart said she believes clients are taking the functions and designs of rooms into greater consideration. As teleworking becomes more prevalent, Hart said clients are looking at homes from the vantage point of seeing whether the home could make a good work space, or a school space for homeschooling children.

Hart said outdoor spaces are also given greater consideration. As more people opt to stay at home, even with gradual reopening of restaurants and public venues, having an outdoor space that meets clients’ needs is even more important. Hart said she believes this consideration from homebuyers about the indoor and outdoor home spaces could continue into the future.