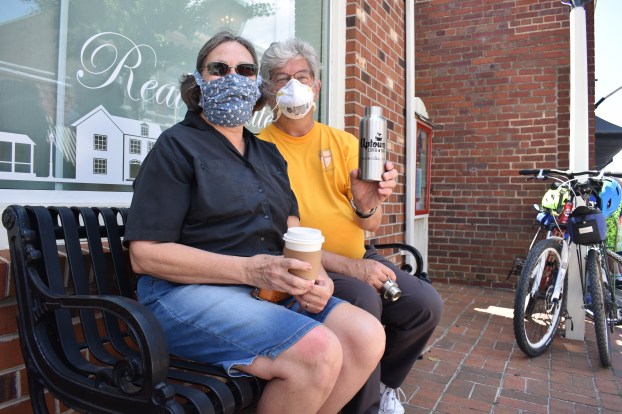 Elizabeth Deis and Lowell Frye said they were a little concerned with the number of shoppers they saw not wearing face masks on Day 2 of Phase 1 in the reopening process. (Photo by Alexa Massey)

Things looked relatively normal in Downtown Farmville Saturday, May 16, during the second day of Virginia Gov. Ralph Northam’s Phase 1 of reopening the state, which included allowing businesses to open at half capacity. Local business owners gave some insight on how they’ve adjusted during the pandemic, and shoppers explained what motivated them to be out and about.

The Farmers Market was operating Saturday morning with social distancing guidelines and signs directing shoppers to walk in only one direction through the market. Mike Johnson, a local farmer, said he felt a little concerned during the pandemic that the market may not open up and that he wouldn’t be able to sell his flowers and produce, but that nothing would go to waste thanks to the hungry cows on a neighboring farm.

Carol Broadwater, owner of Amish Originals on Main Street, said she and her husband operated the store under reduced hours of 10 a.m. to 3 p.m. and under a strict occupancy limit during the Stay-at-Home Order. She said while the store saw highly reduced foot traffic and three days where no one purchased anything, they were able to still take orders for their custom builders and even make sales and deliver items without some customers ever having to step foot in the building.

For a week, Amish Originals has been open from 10 a.m. to 4 p.m. The business has been keeping health and sanitization a priority, and employees are paying special attention to cleaning surface areas and product books after use. Broadwater said she hopes the store will return to normal hours quickly.

“I’m anticipating a decent-sized day as far as foot traffic,” she said Saturday morning shortly after the store opened.

Down the street, Ronald Talley, co-owner of Talley Jewelry, said he and his wife, Laurie, never considered a global pandemic would shut their doors for many weeks when they opened the business back in November.

Talley said the show room was more or less closed during the duration of the Stay-at-Home Order, although the door remained open and he stayed inside working on custom jobs such as jewelry repair. He’s also been offering curbside delivery for some of his services.

“We did a few watch batteries for some people and a couple of sales with some anniversaries, and people were thankful that I was here,” he laughed.

Talley said he would rarely see more than 10 customers in the store before the coronavirus outbreak occurred, so limiting customers on the floor is not a large concern. He has, however, included a sanitization station to ensure cleanliness.

He said he believes the pandemic may have made people more aware of small businesses’ dependence on the average customer.

Green Front Furniture President Den Cralle said Saturday most of the business’ buildings have been open for two weeks under social distancing guidelines. Cralle said all employees are wearing masks, and customers are being encouraged to do the same. The stores have been making masks available to patrons and making sure hand sanitizer is readily available. Additionally, Green Front workers are making sure to regularly clean areas and practice social distancing.

Cralle said customers may be more motivated to refurbish their patios and outdoor living spaces as they move to spend more time outdoors. He suggested some customers unable to take a big vacation or trip due to the current climate of the country may have come to town Saturday as a mini-trip to shop and scratch that travel itch.

Mike Gribik, of Richmond, said he and his family were motivated to come out to Farmville on Saturday after learning about Green Front Furniture. He said his family has been taking precautions, such as wearing masks, hand washing and social distancing, while still trying to give businesses some patronage during Phase 1.

Farmville locals Elizabeth Deis and Lowell Frye were sitting in the shade on a Main Street bench, enjoying coffee from the Uptown Coffee Cafe on Saturday. Regular Uptown customers, Frye said he and Deis had been ordering from local restaurants about once a week to support small businesses during the pandemic, and that Saturday was a welcome change as they enjoyed their favorite coffee outdoors.

The two were concerned about the lack of masks they were seeing in reference to other shoppers, estimating 90% of others walking down Main Street were not wearing a face covering.

“It’ll make me think twice about (coming out) another time to tell you the truth,” Deis said.

The weekend of Saturday, May 16, was the first in quite some time that Farmville restaurants and other eateries across... read more