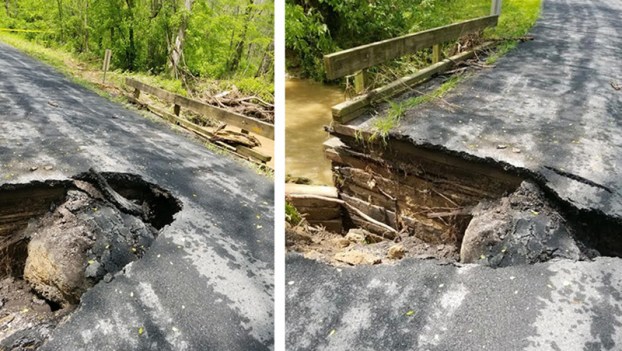 These photos show how the washout of the bridge on Route 620 in Rice extends across most of the roadway. (Photo courtesy of Jamiel Jackson)

Route 620 in Rice was washed out following a rain storm Saturday evening, May 16, according to the Virginia Department of Transportation (VDOT).

Paula K. Jones, VDOT communications manager for the Lynchburg District, said VDOT considers what happened to the bridge to be a washout because some supporting materials have washed away, but it is not a full collapse in which the entire bridge has completely given way.

Based on photos of the washout, a cave-in does appear to extend across the majority of the bridge, though not all of it.

Jones said Monday morning, May 18, that part of the VDOT bridge crew was hoping to be at the site Monday to take a look at it and see what repairs could be made to get the road open as soon as possible. However, she said it may be a little while, and the possibility of more rain will delay things further.

“To make some of these repairs and everything, we need the dry surface and everything and not have that amount of rain,” she said. “Looking at not just the rain that’s coming from the east because of (Tropical Storm) Arthur but also then from this low front that’s on the west, parts of this area could get as much as several inches of rain, including parts of Prince Edward County.”

She said there was a possibility of some rain coming in as early as Monday evening.

“So we’re kind of between storms right now,” she said. “We do need to get the dry surface to make sure that we get out there and are able to not have any further damage because of heavy storms, certainly, and try to shore it up a little bit in advance for no further damage, but also just to make sure that we also have a surface that’s dry enough that everything will adhere and will be properly set and everything in advance.”

Jones said a lot of crew members are working 10-hour days, and it is likely they will try to work on the bridge sometime during their normal 10-hour shift during the day.

“Not to lessen the experience for motorists, but it is a lower-volume roadway,” Jones said of the stretch of Route 620 between Route 619 and Route 617 where the bridge is located. “It’s not typical that we would put up a full crew out there at night with lights and all that other stuff on a lower-volume road. It just really depends on what we find out when they take a look at it today, but not typically would we be out there at night doing it. We’d try to get as much work as possible done, dedicate full hours during that 10-hour day as possible out there.”

Another factor helping crews prioritize tasks is whether or not there is a reasonable detour in the area.

“I thought I understood from the crews that there was another way through there that’s pretty reasonable, but I don’t know that for a fact,” Jones said.

Cooper elected to serve as National Delegate for convention

As a result of the Democratic Party of Virginia’s recent 5th Congressional District Convention, Farmville native, Taikein Cooper has been... read more