Nathion Noble passed away unexpectedly in his sleep at home on Thursday April 9, 2020. 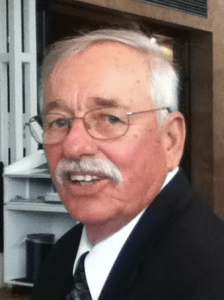 He and his wife of 62 years, Gretchen Noble, created a beautiful cattle farm near Hampden-Sydney, VA. He loved the farm, the countryside, and the people of southside Virginia since moving there nearly 30 years ago. He was a force of goodness and kindness in the life of Douglas Presbyterian Church and in the lives of his many neighbors and friends in the area.

He had a unique talent for improving nearly everything he touched. Be it an overgrown patch of land, a stray dog or cat, a house, a neighbor, or a child, they were all better off after his attention than they were before. He lived the golden rule. And he knew the weight it carries when a respected elder says to someone “I believe in you.”

He was born near Thomasville, Alabama on May 10, 1936 and grew up on a farm there. He joined the US Air Force in the mid-1950s and was stationed at Wilmington, Delaware where he met and married his lovely wife and raised a family. After the Air Force he seamlessly transitioned onto the full-time staff of the Delaware Air National Guard 166th Tactical Airlift Squadron. For over 30 years there, he supported the flight surgeons and other medical staff, while rising to become one of the highest ranks of Non-Commissioned Officer. He was also a Past Exalted Ruler (1982- 83) of Elks Lodge of Newark Delaware.

In the mid-1980s, with his wife’s great support, he rebuilt his health after suffering a heart attack and having bypass surgery. As a result, he had 37 more years, including many of hard work on a farm, showing that a careful combination of diet, exercise, medical care, and good humor can do wonders.

He was preceded in death by his parents, Hillary and Lillian Noble, his brothers Jake and Went Noble, and his brother in law Joseph Wilkinson. Nate is survived by his loving wife Gretchen, his son Ron (Anne), daughter Shelly (Carl), brother Mack Noble, sister Bettye Noble, sister-in-law Mary Anne Salicete, and many wonderful nieces and nephews. Nate will always be particularly loved and cherished as “Pop Pop” by his beloved granddaughter Hannah Noble, who he taught to drive a tractor. He’ll also be remembered fondly by the many kids who grew up as extended family members in his home (Lori, April, Herron, Richard, John, Jim, and Roy to name a few).

Nate is also now reunited with a zoo full of animals that seemed to own him over the years, rather than the other way around (Bigfoot, Girl, Nick, Taco, Pickles, Pepper, Velvet, and King Arthur to name a few). And he will also be particularly missed by the various birds and zillions of hummingbirds (“hummers”) that he kept housed and fed all summer long every year.