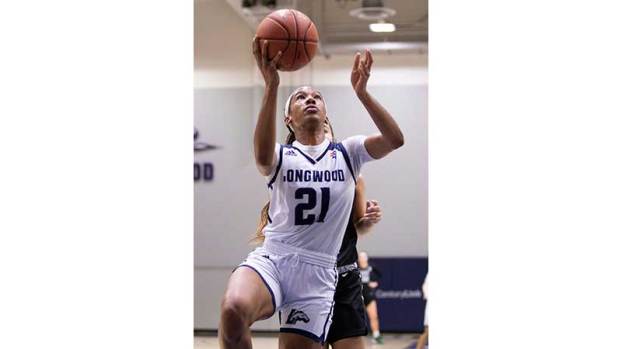 Longwood University senior forward Dayna Rouse makes the most of Senior Night Wednesday, March 4, as she goes up for two. She scored a game-high 27 points to go with 10 rebounds, three blocks and three steals, helping the Lancers defeat visiting University of South Carolina Upstate 69-56. (Photo by Mike Kropf / Longwood University)

A fast start and dominating final frame from Longwood (11-17, 7-12 Big South) was too much for University of South Carolina Upstate (8-20, 3-16 Big South) to handle as the Lancers capped off senior night with a 69-56 victory over the Spartans.

“It was really important for our women to play for our seniors, Dayna Rouse and Jada Russell,” Lancers Head Coach Rebecca Tillett said. “In this day and age in college athletics to have them commit to four years at the same university means something. For both of them to go through coaching changes and the ups and downs of a four-year career, and then be a part of a historic season is special for them. I thought our women did a great job of rallying for them.”

Longwood finished with three Lancers in double-digits, while All-Big South Dayna Rouse and the conference-leading scorer, Kyla McMakin, eclipsed the 20-point mark in the victory.

Rouse got the offense rolling from the jump as she converted the first of her 12 baskets with only four seconds coming off the clock. Rouse finished with a season-high 27 points, shooting 12-of-17 from the floor. Adding to her incredible senior night performance, Rouse added 10 rebounds, recording her eighth double-double of the season.

“All of my teammates were asking me if I was going to cry today since it is a sentimental moment to have my last regular-season game in Willett Hall after being here for four years,” Rouse said. “I was ready to play hard in front of my friends and family. I am very grateful they were able to come from Pittsburgh and parts of Ohio to see me play. They do not make it to many games, but when they are here, they are my good luck charms. It just means a lot to have my family here tonight.”

The Lancers are set to visit Charleston Southern University Saturday, March 7, with tipoff set for 3 p.m.