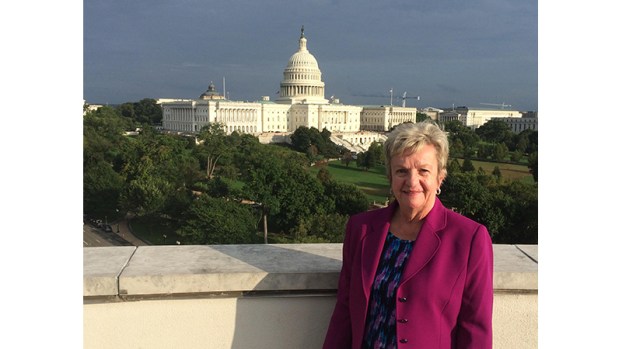 PROGRESS: ‘I want to be where the people are’

Sandra Moss, a native of Buckingham County, grew up in a family of postmasters and car dealers. Although she is known today as the matriarch of Moss Motor Company in Dillwyn, she spent two decades as a substitute mail carrier.

However, Moss’ life is not entirely motors and mail. She also currently serves as the treasurer and newsletter editor of the Buckingham Chamber of Commerce. She sees herself as not one for looking back and instead chooses to focus on what comes next in life.

Moss said when her children grew up, the family decided that the franchise industry was too much of a headache. They came to Buckingham 35 years ago as independents and opened a dealership in the county.

Moss’ life is not entirely motors and mail. She also serves as the treasurer and newsletter editor of the Buckingham Chamber of Commerce. She sees herself as not one for looking back and instead chooses to focus on what comes next in life.

“Where so many people are historians, I’m more interested in today and tomorrow,” Moss said.

She takes pride in her knowledge of the county’s residents, and rarely spots a face in the community she doesn’t recognize.

“We rent cars and sell cars. Between that and my years as a mail carrier, I know a lot of people in Buckingham,” she said. “I don’t claim to know everybody, because we have lots of newcomers here, but I like to say I can find most anybody with a little time, make connections between people and try to help people find the services that they need; do what I can to help.”

In addition to her love of the county, Moss finds great pleasure in taking trips to the city, particularly Richmond. “It’s strange because I enjoy living here, but I sure do like the city. Most any city will do, but Richmond is our city of preference,” she said in reference to herself and her husband.

Moss’ favorite activities in the city include shopping and eating, and she never misses an opportunity to try something new.

When Moss’ husband was a Ford dealer, the couple was lucky enough to have many opportunities to take trips overseas. Their travels took them around the globe, including places like Portugal, England, and Rome. She was also a part of the first group of American tourists to visit the former nation of Yugoslavia.

Although Moss is a familiar face to most of Buckingham, some people may not know about her many passions and hobbies. Moss loves to sing, cook, and bake. Although she claims to have no artistic talent whatsoever, her creativity is reflected in her culinary creations that keep her grandchildren and great-grandchildren asking for seconds.

Moss grew up in Andersonville, but says people laugh at her when she tells them that she moved to the “city” of Dillwyn.

“Dillwyn is the city,” she said, reflecting upon the laughs. “I want to be where the people are.”

Her hope for the county includes a wish for growth. The county’s large size, she cites, means residents are often bouncing from Charlottesville to Lynchburg to Richmond and back again. She hopes as a representative of the Chamber, that the future will bring networking and economic growth to not only the county’s merchants, but all citizens.

Above all, Moss finds immense joy and humility in her large family, most of whom live in or around the county.

“I’m very fortunate, she said. “We are just very blessed to have everyone close by.”

PROGRESS: Time for a change