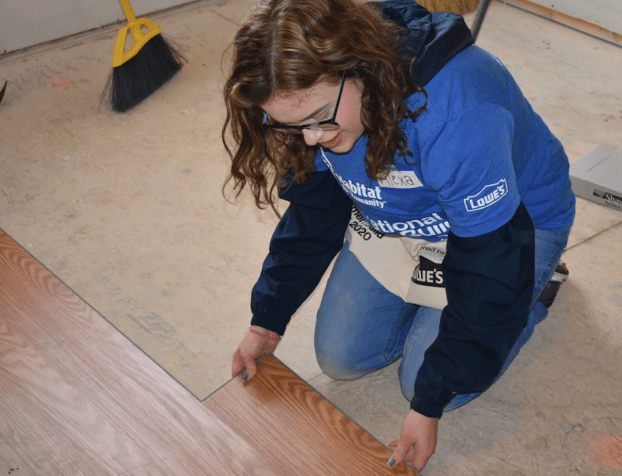 Nearly a month ago I drove out to Cumberland to cover the unveiling of Tarika Brown’s newly-built home.

It seemed the entire county was present at the home’s ribbon cutting. Brown had partnered with Piedmont Habitat for Humanity in order to build the new house, and a crowd of volunteers that had made the build possible gathered that day in celebration of the end product of months and months of hard work and dedication.

That being said, as I snapped pictures of the happy faces in the room and observed the beautiful, brand new home, it was hard to remember just how recently the home had only been a plot of land and a dream. It was hard to truly picture the amount of work and togetherness that it had taken to build such a wonderful thing.

Even sitting there amongst many volunteers, it didn’t sink in just how much of a community effort the entire task had been.

This Tuesday, I drove out to Dillwyn. I wasn’t going to cover a ribbon cutting of a brand new home. I was going to help build one.

I arrived in Buckingham at the site of a future home being built by Habitat volunteers. The day was part of an International Women Build Week, where women in the community partnered with “Lowe’s Heroes” to come together to help build a new home.

When I pulled up at the site, rain had just begun to drizzle and the ground was very much a muddy mess. I pulled on a blue International Women Build t-shirt and tool belt and got to work.

The women who volunteered the previous day had spent the afternoon building decks, but the incoming rain meant that I and the other volunteers would get the most work done inside.

Our goals for the morning included installing doors and vinyl flooring. After a quick lesson, we swept the floor and hammered down any pesky nails before beginning work on the floor.

It was rather funny. I’ve learned that vinyl flooring is a finicky creature. One piece will take 10 seconds to snap into place and the other will take four minutes.

It was amazing to see the women in the building work. I would look at a room that was just beginning to take shape, turn away for a moment and then look back to find it had been transformed into what truly looked like a home.

There were splinters. There were headaches. There were earrings in the shape of a hammer. Above all else, there was a sense of community and womanhood like no other.

If you told my little self that I was going to build a house I would look at you like you were insane, but suddenly, when you tell me that I’m going to help build a house with dozens of other women, the goal becomes reachable.

Unity is what makes a dream possible. Although you may feel weak on your own, we are strong when we are together.

Please don’t get the idea that I in any way played a significant role in the building of this house. I was there for a few hours and managed to install some flooring. My knees were aching five minutes in and I left covered in a layer of sawdust and dirt.

However, I was a tiny puzzle piece in a thousand-piece puzzle. I was a pinky finger in a crowd of hands working to lift someone else up, and when I pass by that house in the future I will know that I had a very small part in making it real.

When you look at a new home you easily forget just how many hands came together to make it possible, but I will not forget this one.

ALEXA MASSEY is a staff reporter for The Farmville Herald and Farmville Newsmedia LLC. Her email address is Alexa.Massey@farmvilleherald.com.

I recently read a blog article in which the author wrote about young adults and how they are having a... read more