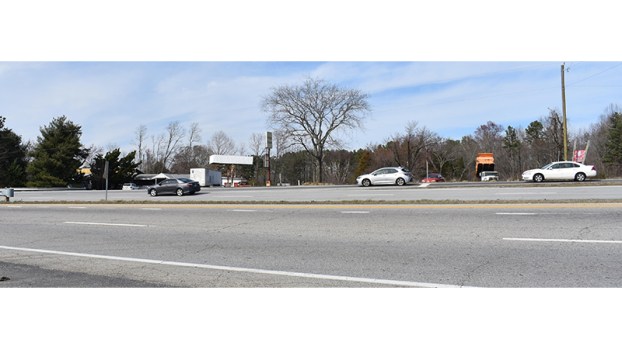 The intersection of U.S. 460 and Route 307 in Prince Edward will be redesigned to increase safety. The work is scheduled to be completed by November of this year. (Photo by Roger Watson)

A $1.8 Million award was made to Pearson Construction Inc. of Dillwyn for an intersection improvement project on U.S. Route 460 at Route 307 in Prince Edward County, according to a Thursday, March 5, Virginia Department of Transportation (VDOT) press release.

The release stated the SMART SCALE project was submitted by Prince Edward County.

The detailed description of the project in its application included both short- and long-term information.

In the short term, the project will reconfigure the right turn lane from Route 307 to westbound U.S. 460 in order to provide additional spacing between Route 307, Route 600 and private property driveways, as well as improved visibility for motorists making this movement, the application stated.

Lynn Perkins, co-owner of Pearson Construction with David Perkins, said the intersection that the project addresses has always been significantly busy.

“This is hopefully going to make the flow of traffic and things be a lot safer in that area, so I’m assuming that’s what VDOT’s plans were when they constructed this and engineered this, and it’s probably what their intentions were,” she said.

The application confirms safety concerns are a reason behind the project.

“This project is identified in the VTrans 2025 needs assessment as Intersection Number 531454 and is ranked for fatal injury 37 out of 100,” the application stated.

Perkins said the project is a good fit for the type of work Pearson Construction does.

“We don’t do bridges, we don’t do asphalt, we don’t do signals,” she said. “We do grading. We move the dirt. We widen the road. We lay the stone. We do all that. We get it prepared for that.”

She said Pearson Construction has an official meeting March 23 with VDOT, and the company hopes to have a notice to proceed date after that.

She said the anticipated completion date set for the project is Nov. 20, 2020.

Megan Clark is a prominent person in the Prince Edward County community due to her role as the county Commonwealth’s... read more