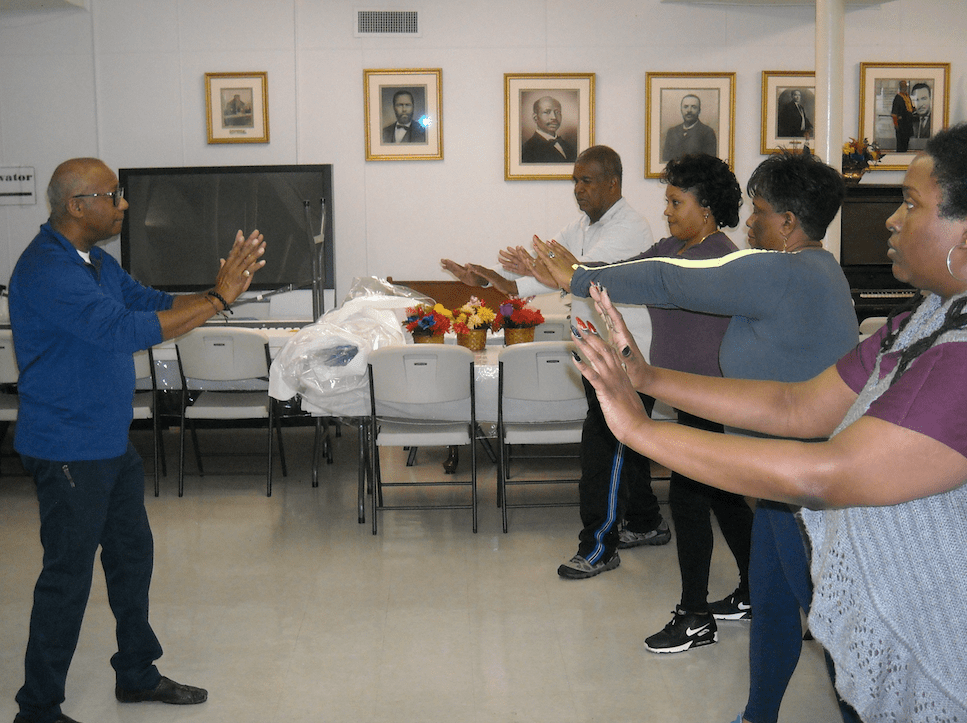 Lonnie Calhoun leads, from left, the Rev. James P. Ashton, Machelle J. Eppes, Shirby Scott Brown, and the Rev. Kimberly Ashton in Tai Chi in the dining hall of First Baptist Church. The class is being undertaken through the church’s women’s ministry. Rev. Ashton said it is in keeping with his emphasis on mind, body and spiritual wellness.

When Lonnie Calhoun teaches a Tai Chi class, he likes to play some music to set the mood. For athletes, it’s something soothing to help them cool down.

This Tuesday afternoon, it was gospel. Then again, this afternoon the class is in the dining hall of downtown Farmville’s historic First Baptist Church.

After many discussions with Calhoun about the possibility of a Tai Chi class as a service to its church members and the community, the first was finally held Tuesday, Feb. 25.

“Sometimes your initial effort is a little slow, but you’ve got to start somewhere,” he said.

The class is being undertaken through the church’s women’s ministry. Rev. Ashton said it is in keeping with his emphasis on mind, body and spiritual wellness.

Rev. Kimberly Ashton, his daughter and head of the women’s ministry, said many of the church’s members are educators and many of its members are health conscious. But for an older crowd, Tai Chi’s slow movements, fluency, self-driven pace and ability to let you continue exercising while seated, is appealing, she said.

“We just want to introduce (the) concept to some people who might not be familiar with it,” she said.

Calhoun has a teaching certification in Tai Chi for arthritis and teaches Tai Chi at Southside Virginia Family YMCA, Piedmont Senior Resources Center, and at the Centra PACE Center.

As far as Calhoun is concerned, Tai Chi has something for everyone.

For those suffering arthritis or just looking for low-impact exercise, Tai Chi offers benefits that include increased strength and flexibility, decreased pain in joints, decreased stress and help to reduce high blood pressure and improve balance.

For this class, those attributes were among those he emphasized. Thus, most of the session he spent stressing proper stretching and reminding the participants that pain isn’t a part of exercising.

“The first rule is to be safe,” he told them. “If you feel pain, stop right away … As we say in the Tai Chi organization, slow is fast enough.”