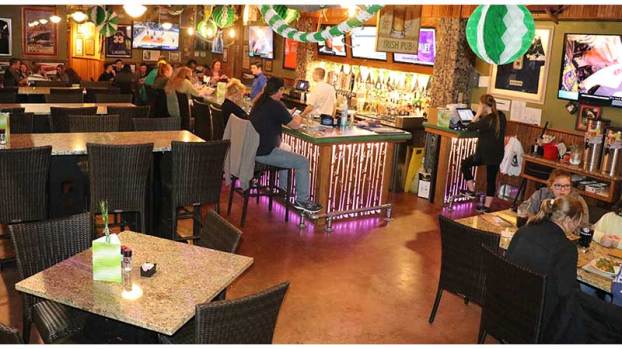 A view inside the new building at Macado’s Saturday night, March 14, illustrated that business was noticeably down due to concerns surrounding the coronavirus. (Photo by Titus Mohler)

Restaurants adjust to new rules in midst of virus concern

Meanwhile, local gyms and cinemas are temporarily shutting down per the governor’s orders.

Tuesday, March 17, Northam strengthened the statewide guidance on social distancing to combat the spread of the virus, mandating all restaurants, fitness centers and theaters to significantly reduce their capacity to 10 patrons or close. Restaurants are encouraged to continue carryout and takeaway options.

The moves were taken to alleviate the spread of the COVID-19 virus. As of Wednesday, there were 77 cases of coronavirus in Virginia out of 1,278 people tested. Two Virginia residents have died from the disease.

Prince Edward County continues to have only one diagnosed case of coronavirus so far. The Longwood student, who received a presumptive positive test shortly after returning from spring break, is the area’s only confirmed case. The student’s two roommates were quarantined and tested. Both students’ tests came back negative for the virus.

Business closures due to the coronavirus have severely impacted restaurants across the nation. Celebrity chef Tom Colicchio said on CNN Monday he would be surprised if 75% of restaurants reopened after the crisis.

Farmville-based food establishments are working to continue to provide customers with high quality meals amid concern for the virus.

Bill McKay, owner of the One19 restaurant on Farmville’s Main Street, announced the restaurant would be open for both takeout and curbside pickup only for the time being. McKay was excited to continue offering the establishment’s Tex Mex food to its loyal customers, even if it meant a temporarily empty restaurant.

Other town restaurants such as The Brew House and Uptown Coffee Cafe are choosing to operate under the 10-patron maximum dine-in restriction as they work diligently to clean and sanitize inside. The Brew House will be closed Tuesday, March 17, and Wednesday, March 18, for cleaning and will reopen under regular hours, although it has canceled events like open mic night, trivia and karaoke.

La Parota in Farmville will be offering carry-out services and Wayfast delivery only for the time being. The North Street Press Club also announced Tuesday it will no longer be open to the public for dine-in service until further notice, according to a Facebook post. The eatery will offer takeout service.

Other town businesses affected by the governor’s mandate include Sunchase Cinema 8 and the Southside Virginia Family YMCA.

Diane Caton, an owner’s representative for Sunchase, told The Herald Tuesday that the business was making the difficult decision to close the theater for the time being.

“There is currently no set time when we will resume business as usual, although our hope is that that will be sooner rather than later,” the company said in a Facebook post about its decision. “We will continue to monitor conditions as they evolve in coming days with a focus on resuming operations as quickly as possible. In the meantime, we have committed to paying our hard-working team members for up to two weeks while we are closed.”

The YMCA announced it would be closing the facility to members until March 29. In an update to customers Sunday, March 15, the business stated it is currently working on offering free virtual and prerecorded group fitness classes via its YouTube channel and Facebook page.