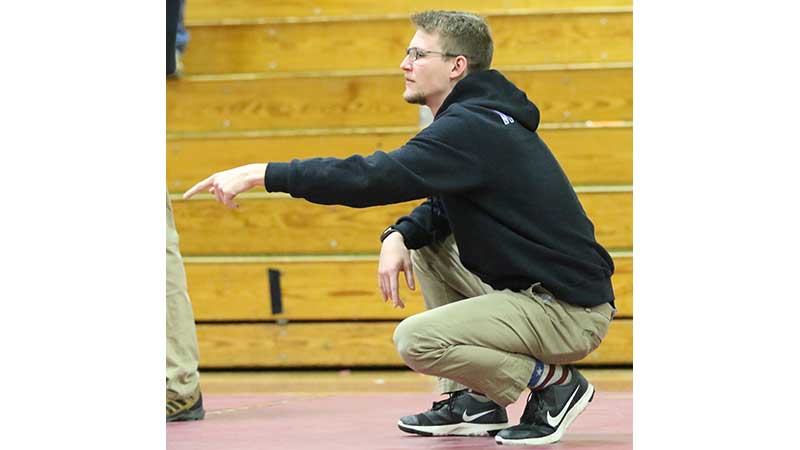 Cumberland County High School Athletic Director Joseph “Joey” Nowak offers some instruction to a Dukes wrestler during the 2020 James River District Tournament that Cumberland won. Nowak describes wrestling as the sport he is most passionate about. (Photo by Titus Mohler)

It is rare you see someone at the age of 25 serving as an administrator in a public school system. But for Cumberland County High School’s Joseph “Joey” Nowak, the large responsibility of running the athletic department at a young age isn’t a rarity – it’s his reality.

Joseph “Joey” Nowak, who turned 25 earlier in February, officially began his duties as CCHS athletic director July 1, 2019, when he was 24.

Nowak said he decided he wanted to go into the education field around the time of his sophomore and junior years at Centreville High School in Fairfax County, where he grew up. He began by taking some education classes.

“I went to Longwood (University) for education, and one of my long-term goals was to get into the administration side of education either as a principal or getting into the student services or student activities, athletic director side of it,” he said.

He shared his goal with Cumberland County Public Schools when he interviewed there for a math position, and administrators were listening. He was hired as a teacher, but showed himself to be what CCHS Principal Eugene Williams Jr. described as a conscientious young man who had formed solid relationships with his middle-school students and someone who had stepped in to help coach teams and lead the high school athletics program.

When former CCHS Athletic Director Alfonso Bell opted to step down and focus his energy on his other major role as the school system’s transportation coordinator, administrators made Nowak’s long-term goal a reality.

“It just came a lot faster than I was even anticipating,” Nowak said.

With more than six months on the job now, Nowak said it is definitely not exactly what he pictured when applying for and accepting the job, but he has found joy in it.

“It’s definitely been a learning experience, being brand new to it, but it’s been fun,” he said. “I’ve really enjoyed it. Sports have always been a big part of my life, so being able to continue doing stuff with sports, especially at the high-school level, has been great.”

He estimates working an average of between 50 and 60 hours a week. The hours are long, but Nowak said what he enjoys most about his work is seeing student-athletes having fun playing sports, which was his focus when he participated in them as a child.

“I never really did sports because I wanted to become a pro athlete. I understood I was 5 (feet), 2 inches, about 90 pounds until my senior year in high school,” he said. “I knew I was never going to be an NFL player or an NBA player or MLB, whatever.”

But this did not stop him from competing in a wide array of athletic endeavors. In high school, his main sports were football and wrestling, and he played two years of lacrosse. He played rugby in a travel league for about 10 years, and also participated in soccer, baseball and hockey in youth leagues, along with football, wrestling and lacrosse.

He went on to play four years of football in college on Longwood’s club team, something he said may surprise his Cumberland students due to his smaller size. He also served as a student coach for the Longwood football team for two years, adding to his coaching experience that began in high school when he helped coach his sister’s softball team with his father.

The demands of the athletic director position do not leave Nowak with much time to impact his community outside of his job, but he did help start the Youth Wrestling Club through the county’s recreational association.

“I try to come out and support our rec leagues as much as I can,” he said.

When not working, Nowak said he is generally relaxing at his apartment or spending time with friends in Richmond. He also routinely visits family in Hampton Roads.

The work of feeding others