A ray of Sunshine for Area 12 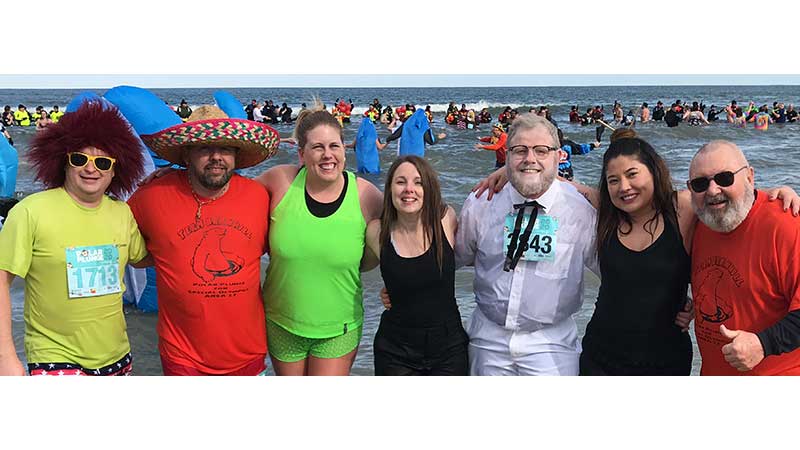 Bob Barnhill’s passion for supporting Special Olympics is on display in this photo with the team he helped form. Team Barnhill stands in the chilly waters of the Atlantic Ocean in Virginia Beach Feb. 8 after participating in the Polar Plunge 2020 to raise money for Special Olympics Virginia and Special Olympics Area 12. Pictured are, from left: Lewis Hutchins, Derrick Barnhill, Heather Jones, Amber Conrad, Harold Rose, Sharon Noe and Bob Barnhill. Not pictured is Ian Brock.

It is not unusual for athletes and staff associated with Special Olympics Area 12 to shout “Sunshine!” when they see Bob Barnhill.

He received the nickname due to his friendly, easygoing personality and his being born in the Sunshine State, Florida. The moniker accompanies him everywhere, including within the Special Olympics area he has supported for more than a decade.

Barnhill has helped raise more than $40,000 for Area 12, which represents Prince Edward, Buckingham and Cumberland counties.

“I’m just a volunteer fundraiser is the way they classify me,” he said.

His work benefiting Special Olympics Area 12 started in connection with another group with which he is active.

Barnhill, 74, is part of Cruiser Club, USA — a family-oriented motorcycle riding club. He serves as the chaplain of the club at the national level and at the area chapter level, specifically for Chapter 30, known as the Heart of Virginia Cruiser Club, which was founded in Farmville in 1998.

He estimates it was back in 2006 when Chapter 30 took on Special Olympics as an organization it would help. He said that in either 2009 or 2010, he took his first Polar Plunge.

The Polar Plunge is held in multiple locations in the state and serves as a fundraising event for Special Olympics Virginia.

Barnhill has become a regular participant in the Virginia Beach Polar Plunge, which annually features thousands taking a chilly dip in the Atlantic Ocean. The event was held Feb. 8 this year. It costs $100 to enter.

He said he went with one other member of the Cruiser Club the first time. Then he started Team Barnhill with his son, Derrick Barnhill, in 2010 and has gotten more people involved.

“And we’ve been making the plunge every year since then,” Bob Barnhill said.

He said the money distribution is now 50/50, meaning 50% of what Team Barnhill raises through the Polar Plunge goes to Special Olympics Virginia and 50% goes to Area 12.

“That’s what I collect online now,” he said. “I do an awful lot of offline collection now for Area 12.”

He said he has had three events this year.

“I had one at Bojangles’, (The) Fishin’ Pig and Pizza World,” he said. “I held three different events there to help raise money, and all of that went to Area 12. Our coordinator, Johann Greer, has helped me on all three of those events.”

Barnhill is also a familiar face at Special Olympics Area 12 sporting events, be it basketball, bowling, softball or another sport, cheering on the athletes.

Greer, the Area 12 coordinator, expressed tremendous gratitude to Barnhill for his support.

“Sunshine has been a true blessing to our area,” she said. “He is dedicated to our area and shares the importance of raising funds for our local area.”

She highlighted his regular attendance at the Polar Plunge.

“He and his team have donated around $42,000 to our area,” she said. “We are so delighted that Sunshine chose to support us.”

Barnhill explained the inspiration for his becoming such a key contributor to Special Olympics Area 12.

“Well, the good Lord sent us a Down syndrome baby, my niece Amy, which (with) God’s help and what have you, she turned 47 this year,” he said. “She was not supposed to even live to be a year old.”

He said she had a missing heart wall, and when she was 1, doctors performed open-heart surgery on her and repaired the wall.

He said she participated years ago in Special Olympics, competing at the national level in track and field. She ran the 50-yard dash.

For those interested in contributing funds to Special Olympics Area 12, they can mail contributions to the following — Area 12 Treasurer James Ferrell, 2330 Cumberland Road, Farmville, VA 23901.

Reid appointed to VTA board