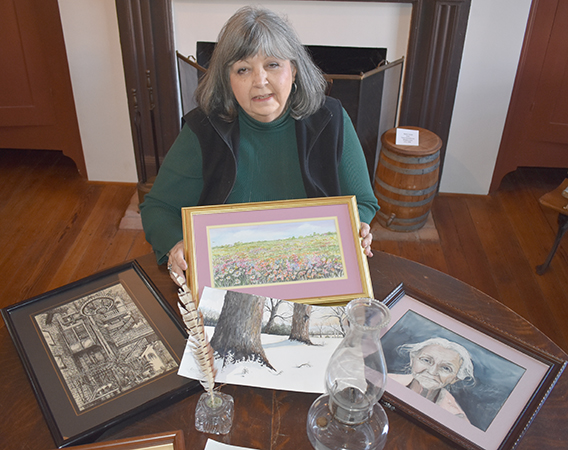 Martha Louis, a Buckingham native known widely for her artistic talents, poses with several examples of her artwork in various mediums.

Martha Pennington Louis was born at Southside Community Hospital on Mother’s Day, 1949. She was brought home in a basket to her family’s home in Buckingham to join three older siblings. Her older sisters, Jane and Nan, had just read the novel “Little Women” and insisted on naming the new baby “Jo” after Louisa May Alcott’s character, Josephine. Louis’ mother could bear this for only one year before changing her name to Martha.

Louis’ family has a rich history in Buckingham. Her parents came to the county looking for a place to settle and establish a rural medical practice after World War II.

The family became heavily involved in the county. Her father was an avid hunter, and Louis said that what is now The Virginia Wildlife Federation began in her family’s backyard, with her father serving as the group’s first president. Her mother, both a doctor and an artist, was involved in getting ArtMobile to come to rural Buckingham, and what is now Central Virginia Arts began in the family’s front yard.

Her family’s tendencies to create and facilitate inspired Louis to become an artist herself.

In 1974, she helped start an art show in Farmville that became the Heart of Virginia Outdoor Art Show. She previously was a part of the Buckingham Artist Guild, a group of local artists working hard to sell their artwork and assist in upkeep of the county’s art center. Another organization, Historic Buckingham, is very near and dear to Louis’ heart.

Louis also chaired the Jamestown 2007 organization for Buckingham County, commemorating the 400th anniversary of the founding of Jamestown. During this time, she helped to open The Historic Village at Lee Wayside after a decade of work by many volunteers, as well as the Brush Arbor Service at Alexander Hill Baptist Church.

Louis attended Richard Bland College and X-ray school at the Medical College of Virginia. She worked at the Centra Southside Community Hospital in radiology before taking up a career at Central Virginia Community Health Center in 1975. This year marks 45 years for Louis at the center.

She is married to her husband, Paul, who she said has put up with her “crazy projects” for four decades. They have two grown and married children, Melissa and Benjamin, and three grandchildren, Oliver, Cayde and Margot.

Louis explained that in reference to her artwork, she tries to work in pencil and watercolor whenever possible.

“I have so many ideas in my head to put down on paper, and limited time,” she said. “When I do have an uninterrupted day to paint, it is not only rare, but like dessert, a guilty pleasure.”

Louis attributes much of her success to her mother.

“She was very quiet and unassuming, but bull-headed and determined,” Louis said. “She went into medicine when women did not. She raised four children while holding down a medical practice, painting or sketching when she could, making most of our clothes, costumes for school and more. When she had her eye on a goal, she didn’t stop because it was too hard. I only hope I can achieve half of what she did in my life.”

She added that Buckingham County, the geographical center of the commonwealth, is special to her due to its natural beauty and the diversity of its population. “I love that we only have two stoplights,” Louis said. “I love that on any given day at the local Food Lion you might see an Amish couple, a seminary student, a Mennonite family, a swami from Yogaville or students from Discovery School.”

It is a notable thing in the Farmville community that when spring approaches, people in the area can expect to... read more