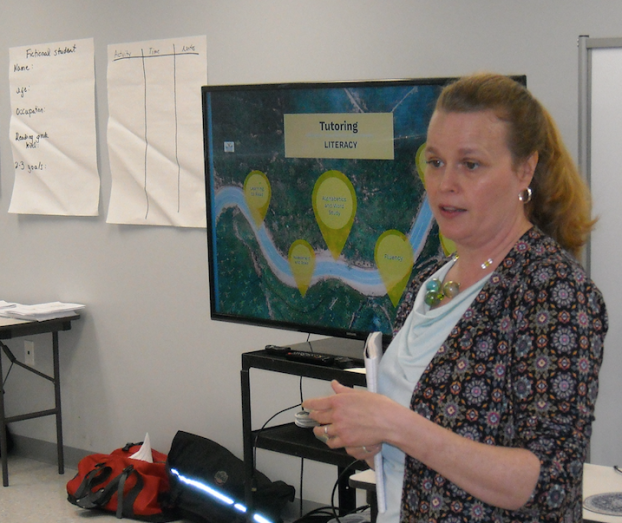 The Prince Edward County Literacy Council continues to reach out and seek potential students, passing out flyers about their efforts and asking supporters for word-of-mouth assistance.

Meanwhile, planning is also underway for another training session for potential tutors either February 27, 28, or 29.

Those interested in taking the training or tutoring can get in touch with Lonnie Calhoun at (804) 307-4748 or by email at charlit401@gmail.com.

The council and STEPS Inc. are jointly undertaking efforts to re-establish or strengthen local Adult Basic Education, English as a Second Language, and Family Literacy efforts. The effort works with everyone from those who, did not finish school, to transplants from foreign countries who speak English as a second language. Flyers about the literacy effort have been distributed through local groups such as FACES.

The labor-intensive effort has seven people being tutored right now, and five others who are awaiting assignment, Calhoun said. Some people can be tutored for years and work with multiple tutors.

“We’re not going to get a tidal wave of interest – it’s going to be a slow trickle,” Calhoun said. “No one wants to be the one that is reading” at a low level.

Right now, all of the instruction is one-on-one, but organizers are receptive to group efforts.

“I think we’re going to get an uptick in people reaching out to us as the flyers take effect and the weather improves,” he said.

Overall, tutoring efforts include functional ability such as writing a resume, and doing a mock interview. Advocates also want an emphasis on incorporating technology such as computers into the daily life of the learners.

A litany of community organizations and groups has offered support to the endeavor, including the Barbara Rose Johns Farmville-Prince Edward Community Library, which will house the tutoring sessions and will offer computer instruction.

A Facebook page has also been set up to advertise literacy council meetings and provide updates on activities and happenings.

The Rev. John Hurt is a member of the literacy council, and also a part of Prince Edward’s infamous Lost Generation, those mostly African Americans denied an education when the county closed its schools rather than desegregate.

Hurt had just completed the first grade when the schools were closed. While they were closed, Free Schools operated by patrons were opened, and he did briefly attend. But when the public schools reopened five years after initially closing, he did not return.

The Rev. Hurt said during his New Year’s Eve sermon he encouraged people to take advantage of literacy efforts.

Many are ashamed of not being able to read, and sharing his story helps them connect, Rev. Hurt said.

“The main thing is to let people know you’re not dumb because you can’t read,” he said.