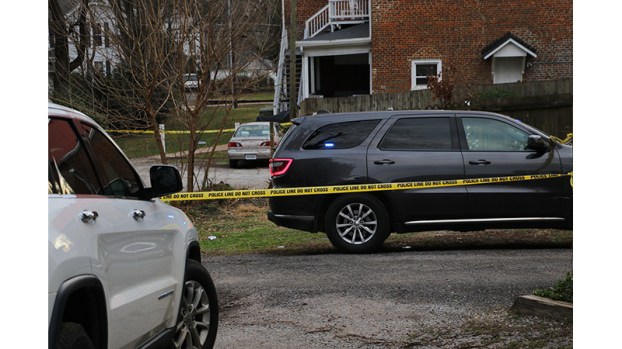 Police sealed off an area behind Grove, Oak, Appomattox and Buffalo streets for the purposes of collecting evidence in connection with a report of shots fired Friday, Feb. 7. No injuries have been reported. (Photo by Titus Mohler)

“There are no reports of injuries,” Capt. Bill Hogan said in an interview around 5 p.m. Friday. “We do have a couple of vehicles that appear to have been struck. We’re checking that now, and it is obviously still under investigation. We’re interviewing multiple witnesses.”

Hogan provided some more specificity in a Monday morning, Feb. 10, interview, saying that two vehicles and the rear of a residence that fronts on Oak Street were hit by bullets.

He said there were no other updates to report at that time.

An update from Longwood at 4:09 p.m. Friday, Feb. 7, stated police had secured the area on Oak Street and normal activity could resume in the area.

“A parking section is taped off as investigation continues, so please avoid that area,” officials said in the Friday update.

The update concluded by stating that if anyone has any information that could help police, they should call Sgt. David Ragland at (434) 547-2375.

“I have been informed FPD is working a shots fired call in the 100 block of Oak Street,” Farmville Police Chief A.Q. “Andy” Ellington said Friday afternoon, Feb. 7. “At this time one person of interest has been detained.”

This is a developing news story. Stay with The Herald for further updates.