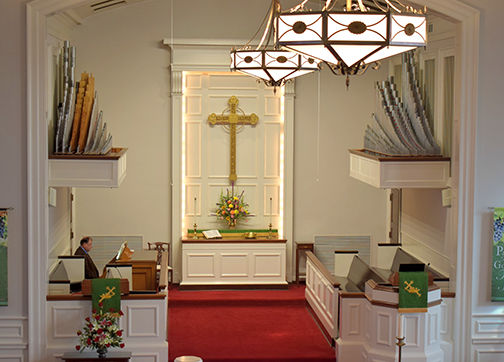 To celebrate the installation of a 30-rank pipe organ in the Farmville United Methodist Church (FUMC), a series of concerts featuring local organists titled “Make A Joyful Noise Unto The Lord” was held in 1974.

Some 40 years later with that “joyful noise” in need of repair, FUMC launched an organ renovation.

With renovations recently completed, another celebratory concert has been planned for Sunday, Feb. 16, at 3 p.m. featuring a slate of local organists. The community is welcome to attend.

Center stage for this event will be Farmville UMC’s organ, built and installed by Austin Organs, of Hartford, Connecticut.

“Every organ is designed individually to fit specifications and size and how much space it has to fill,” Ring explained. “An organ is measured by the number of pipes and ranks — a rank is one group of pipes that produce a specific sound.”

“There are 904 pipes visible; the others are back in the chambers behind the exposed pipes,” Ring added.

Most pipes are made of annealed zinc, lead and tin alloy called “spotted metal.” Other pipes are of bass wood or white pine, and the reed ranks have brass reed tongues. The pipes vary in size from the diameter of a lead pencil to wooden pipes more than a foot square. They range in length from a half inch to 16 feet.

Repairing such a complex instrument is a lengthy and specialized process.

The renovation was completed in stages.

“We initially used a memorial gift to complete two needed projects,” Ring explains. “First, three wind chests in the organ chambers that capture air coming from the blower in the basement and distribute appropriate amounts of air to the pipes were taken to the Lewis & Hitchcock shop to be rebuilt. Second, the green grill-cloth panels that covered openings between the chancel area and organ chambers were replaced with wooden slat panels that allowed better airflow.”

Remaining renovations, part of the second phase of the church’s capital campaign, began in July 2018.

“At that time the old organ console was taken to the Lewis & Hancock shop to be completely rebuilt and digitized,” Ring continued. “The entire inner workings of the console were replaced with digital connections. The second job was re-leathering pouches and pneumatics of valves that connect the wind chest bellows to individual pipes.”

With more than 1,500 pipes, it was a time-consuming process.

Now with renovations complete, Farmville UMC’s organ is ready to inspire. For organists, inspiration is a part of the job. It happens each time the majestic tone of 1,500 pipes sounds the opening prelude.