William Bidgood Wall, 91, died January 9, 2020 in Farmville, Va. He was born November 28, 1928 to Joseph Barrye Wall and MaryLeGrand Lancaster Wall.  He was preceded in death by his wife of 66 years, Iris Dawn Sutphin Wall and a brother Joseph Barrye Wall, Jr. 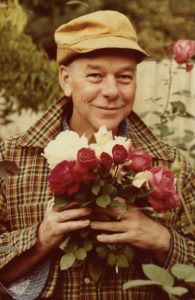 Mr. Wall, who achieved the rank of Eagle Scout was a graduate of St. Christopher’s School in Richmond and Hampden-Sydney College.  He did post graduate studies at Babson Institute of Business Administration in Wellesley, Massachusetts. In high school and in college he was an outstanding football player whose teammates and opponents included some of the most noted players in the State.

Mr. Wall attended officer candidate school and served in the U.S. Navy attaining the rank of Lt. j.g. He was a communications officer on the aircraft carrier USS Salerno Bay. Following his military service, in 1954 he returned to Farmville to rejoin his father in the operation of The Farmville Herald newspaper and Farmville Printing as General Manager. Under his leadership the paper grew from a single edition weekly paper to three times a week becoming the 10th largest non-daily paper in Virginia. In the early 1990’s he oversaw the creation of radio station WVHL-FM. He was an award winning photographer and a gifted writer. He was recognized by the Virginia Press Association for service to the newspaper industry with over 60 years of service.

In his spare time with family  and friends Wall enjoyed hunting, fishing, boating, gardening, dogs, sports, his grandchildren, playing tennis with his wife well into their 70’s, and he also enjoyed a good drink of Scotch. He was a dedicated supporter of Hampden-Sydney and his fraternity, Kappa Sigma.

During his decades at the newspaper, he hired dozens and dozens of local people from paperboys to sports editors. His employees were like his extended family and they appreciated his fairness and respected his opinion.

A celebration of his life was held Sunday, January 12 at Puckett funeral Home. A special thanks is given to his amazing sitters and those special people employed by The Woodland at the Watson Memory Unit. Please consider a memorial gift to the Prince Edward Volunteer Rescue Squad.