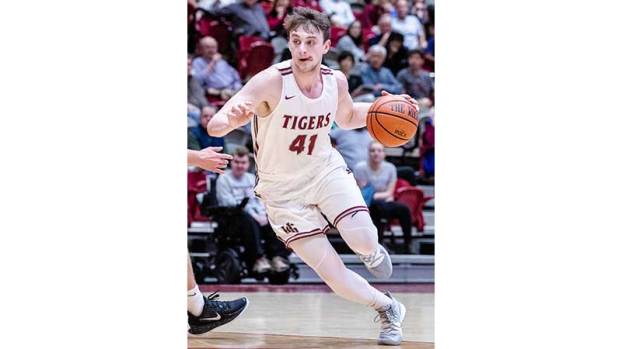 After defeating Hood College 77-72 on Dec. 29, which was day one of the Hampden-Sydney College (H-SC) Holiday Classic, the host Tigers men’s basketball team finished undefeated in the two-day event by topping Sewanee: The University of the South 77-64 on Dec. 30. A Hampden-Sydney Athletics press release noted that junior captain Jake Hahn, pictured at right, equaled his career-high with a game-high 23 points, adding a game-high 12 rebounds for his seventh double-double this season to lead the Tigers against Sewanee. “Great win today for the guys,” first-year H-SC Head Coach Caleb Kimbrough said in the release. “Very slow start against a really talented Sewanee team, but we stayed with the game plan and were able to make some plays in the second half. Conference play from here on out … this is what we have been preparing for all year.”