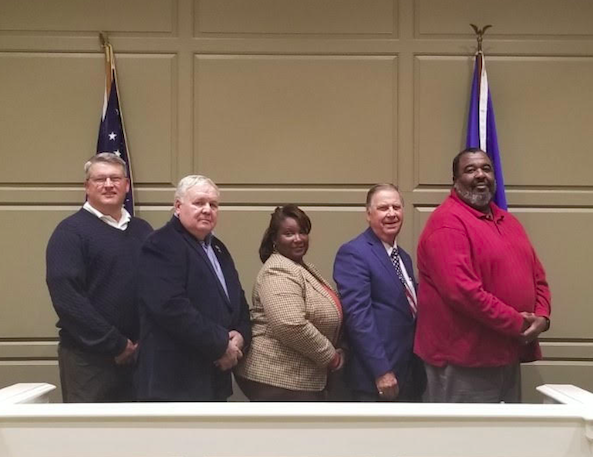 All five new members of the Cumberland County Board of Supervisors gathered for their first meeting of the year Jan. 14. The meeting included the choosing of both the chair and vice chair positions on the board, as well as some changes to the way that future board meetings will be run.

The first steps on Tuesday night’s agenda were the nominations for chair and vice chair positions.

Tyree made a nomination to elect Stanley as the new board chairman. The nomination was seconded by Tavernier, and the board unanimously agreed to the nomination. Handling of the agenda was then turned over to Stanley, who opened up the meeting for nominations of vice chair.

Tavernier nominated Tyree for the position of vice chair. The nomination was seconded by Stanley, and the board voted unanimously to make Tyree the new vice chair.

The portion of the meeting pertaining to organizational and administrative matters included the approval of the new board’s bylaws, code of ethics and standards of conduct. Included in this was an alteration to the typical board schedule.

Previously, board meetings were held monthly at 7 p.m. in the Cumberland County Circuit Courtroom A. Whenever the previous board elected to go into closed session to discuss private matters, it did so at the end of each board meeting.

“The board going forward is going to go into session at 6 p.m., adjourn into closed session no later than 7 p.m. and start the meeting at 7 p.m., and that way citizens don’t have to sit around here and wait to see what the outcome is or whatever happened in closed session,” explained County Administrator Don Unmussig. “We’ll take care of it upfront. That’s what the new board asked for.”

The continuation of first meeting was heated, with many members of the public coming out to submit comments to the new board. While most welcomed the supervisors to their new positions, many took the time to address concerns about county issues, primarily the controversial Green Ridge Recycling and Disposal Facility. Others cited frustrations with the previous board, imploring new board members to maintain a close and transparent relationship with the county’s citizens.

New vice chair Tyree took a moment during the board comments portion of the meeting to address the concerned residents.

She continued, “We accept your comments, but we just ask that you give us some time to work with us to get everything established. Yes, the five of us are new here, but at the same time, we all are here to represent Cumberland. We’re not representing ourselves … We want what’s best for Cumberland and we’re going to do it the correct way. Everybody’s not going to be happy with everything that we do or say, but our goal is to do what’s best for the majority of Cumberland County, so please just work with us. That’s all that we ask.”

The Cumberland Volunteer Fire Department was dispatched to a residence in the 300 block of Clinton Road on Thursday afternoon,... read more