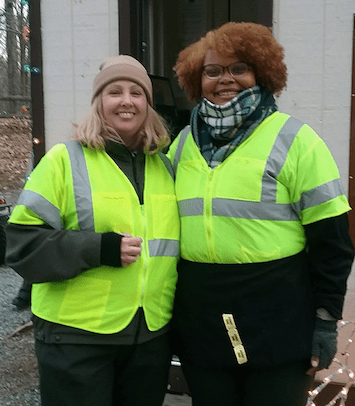 From left, Bear Creek Lake State Park Rangers Laura Moss and Lorraine Foster helped to collect toys and donations at the 2019 Lights at the Lake program.

Lights at the Lake doubles donations

The 2019 Bear Creek Lake State Park’s Lights at the Lake event in Cumberland doubled its number of donations from the previous year, according to a release from Virginia State Parks.

Thanks to the tireless work of the Friends of Bear Creek Lake State Park (FoBCLSP) group, a team of camp hosts as well as community participation, the light show was able to raise more than 800 toy donations and $3,600 for the Cumberland Christmas Mother program.

According to the release, this year’s donations were distributed to 118 families including more than 300 children, 65 teens and 156 seniors.

“It’s been such a blessing,” said Debbie Kennel, who has been chairwoman of the Cumberland Christmas Mother for 12 years. “Through the years we’ve watched girls come to us needing help, and now they’re coming back to volunteer. And everyone is always so grateful.”

Debbie and her husband, Tim Kennel, are heavily involved in the community. The couple volunteers for five months each year as camp hosts at Bear Creek Lake State Park. Tim serves as president of both the FoBCLSP and Virginia Association for Parks. When he’s not volunteering, the release cited, he and friends group member Rich Armstrong are preparing for Lights at the Lake.

In the light show’s inaugural year, the release stated, Debbie and Tim immediately saw the potential. “There was a substantial bump compared to normal winter traffic in the park,” said Tim, “so the friends (FoBCLSP) decided to take it on to bring in more people, toys and money for the Christmas Mother.”

With each year the lights become more elaborate and the events grow even more festive. The 2019 Lights at the Lake included light displays programmed to music, an all you can eat pancake dinner, photos with Santa and s’mores and hot cocoa by a campfire. According to Tim, the musically choreographed lights, courtesy of Armstrong, “really put the show over the top this year.”

Park Manager Joey Dayton is anticipating the program to grow even larger. “The churches, businesses and other organizations that participate in the site decorating contest really make Lights at the Lake and help spread the word,” said Dayton.

For Dayton, the goal is to keep up with FoBCLSP. It is a tall order. According to Tim, the group has big plans to step it up over the next three years. The 2020 goal is to raise $5,000 for Cumberland Christmas Mother.